The date was 26th December 2004 and the impending event would scar the lives of so many people.

My account of this tragedy is based on what happened on the Andaman coastline, though I fully appreciate that other countries and continents were also badly affected.

In Thailand, more than 8,000 people were killed in the disaster, or have never been reunited with their families.

This included over 2,000 foreign tourists, most of which were taking holidays in Phuket.

The Indian Ocean tsunami was triggered by an undersea earthquake off the Indonesian island of Sumatra, and as the huge waves of tumbling water struck the Andaman shores, Phuket and its surrounding regions suffered raw nature at its worst.

Phuket divers, who were actually under water at the time, recall a surge of water that pushed and pulled with all its might. Dive boats were smashed, snorkelers were dragged along the beaches, and sunbathers were completely overwhelmed by a wall of water crashing overhead. 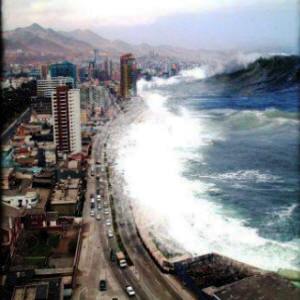 As you may expect, tourism in this region suffered tremendously, and has not yet fully recovered.

Thai divers are traveling other diving destinations and during the last five years, scuba diving in Pattaya has seen a positive increase in the number of divers making a trip to dive in the Gulf of Thailand.

The Pattaya diving communities are united in their efforts to attract more tourists and also to satisfy its expanding number of residing expats.

The islands near to Pattaya offer divers and snorkelers a mixture of shallow calm bays sheltered from the strong currents, to deep dives around World War II US Landing Crafts that have been intentionally sunk by the Thai Navy, creating artificial reefs.

Most of the Pattaya dive sites can be reached by a dive boat within two hours and there are many PADI centers that offer daily scuba courses for beginners, fun diving day trips for certified divers and snorkeling tours for a relaxing day out to the coral islands.

Most of the Pattaya dive sites have year-round access with a good variety of diverse locations. We have shallow water coral drift dives and deep sunken shipwrecks. There are numerous scuba activities that can entertain beginners and excite the most experienced.

The Pattaya Near Islands include Koh Sak, Koh Larn and Koh Khrok. Koh Larn means "Coral Island" in Thai, and the Thai's feel that Koh Sak and Koh Khrok resemble a mortar and pestle, so they named them after the kitchen tools that they use to crush peppers.

The Pattaya Far Islands include Koh Rin, Koh Man Wichai and Koh Phai. Because these island dive sites are around 15 km from Pattaya, they tend to be less crowded by dive boats and water sport activities.

The boat trip takes about 90 minutes to get there, but the clearer visibility and the vibrant marine life makes these Pattaya dive sites worth the trip.

Early in 2003, the Thai Navy sank a decommissioned U.S. Warship between Koh Phai and Koh Larn Island approximately 15 km from Pattaya. The ship lies in 30 meters of water in the Gulf of Thailand, and was intentionally sunk to provide a breeding ground for fish and a wreck dive for scuba divers.

The Thai Navy prepared the ship as a dive site, and it is free from arms, oil and most of the other hazards to divers. The large holes that were made in many areas allow penetration dives through the ships passages whilst remaining in natural daylight.

Thailand dive sites are exciting for all divers, but wreck diving in Pattaya is 'nautical' miles ahead! In September 2006 the Royal Thai Navy sunk the HTMS Kood a short 45 minute boat trip from Pattaya Beach. The Kood World War II US landing craft became the nearest wreck sunk close to Pattaya, available for recreational divers with a license above entry level.

A sister ship of the HTMS Khram, the Kood is another fine example of a thriving artificial reef offering another great dive site in Pattaya. Just to the northeast of Koh Sak, the bottom of the wreck lies at 30 meters and the top of the tower at 12m.

Originally an Indonesian-registered freighter, the Hardeep sank in 1943. More than sixty years of growth has seen the soft coral formations and tube sponge gardens firmly establish themselves, and the wreck provides a safe home for older and larger fish families.

The fish life on the Hardeep Wreck includes barracuda, angelfish, jacks, trevallies, batfish, and butterfly fishes. Laying on its starboard side in 27 meters of depth, the wreck is only 42 meters in length and contains some very large openings to allow divers a view of the engine room and crankshaft.

The Bremen is an 88 meter long Thai cargo ship that sank in the 1930's following an engine room explosion. The wreck now lies on the sandy bottom in 22 meters between Sattahip and Koh Khram. Though the wreck is badly broken, the bow and stern sections are still relatively intact, but the center part is mostly mangled steel.

Wreck Penetration is generally not recommended on this dive. Though the currents can be strong here, if you plan your dive appropriately, the highlight of wreck diving the Bremen, is trying to spot the large Eagle Rays that thrive in these waters. The Bremen Wreck is situated in open water and experiences strong currents for much of the year. The optimum time to dive the Bremen is from December to March.

Pattaya, as a diver's destination, cannot realistically compete with the natural underwater beauty of the pristine coral reefs of Phuket, but its aim for the near future is to attract scuba divers by hosting a special wreck diving region, having up to 5 new wrecks in the Pattaya coastline area and helping to conserve and improve its marine environment.

These artificial reefs provide a home for new coral formations and aquatic life, with the added bonus of being 'off limits' to the local fishermen which encourages larger fish to inhabit the wrecks.

Scuba diving in Thailand has rich rewards for its divers, such as world class dive sites in Phuket or the Similan and Surin islands. These destinations are recognized for their vibrant marine life, nutrient-rich coral reefs, and clear blue warm water.

As Thailand continues to recover from the tragedy five years on, there is little physical evidence of one of history's worst natural disasters, other than an occasional Tsunami 'Hazard Zone' sign. Phuket remains one of Asia's premier holiday resort islands, and although tourism is down, few people blame the Tsunami.