Sea turtles inhabit three of the four main oceans, the exception being the Arctic.

They fulfill an essential role in the world's marine ecosystems and have done so for more than 100 myr.

Tragically most the seven dissimilar marine turtle species are currently classified as endangered.

The focus of worldwide conservationists targets the green turtle, loggerhead, leatherback, and the hawksbill turtles among the most pressing cases.

The demise of these ancient seawater creatures principally results from human greed and ignorance.

Their survival is in serious danger because of the exploitative value of their eggs, their skin and their magnificent shells.

As if this barbaric slaughter wasn't enough, they also die by accidental capture.

Poachers and fishermen are oblivious to the destruction and suffering that their activities and industries cause to their population.

The current facts about global warming and rising sea temperatures suggests that turtle nesting sites and the sex of their offspring are directly affected by the earth's climatic issues.

Six of the seven extant species are [Cheloniidae]. The exception is the leatherback [Dermochelyidae]. 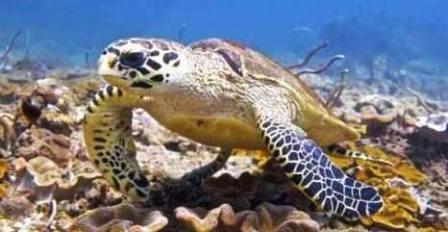 Turtles, tortoises and terrapins belong to the family order of Testudines.

This means they are characterized by a cartilaginous shield or shell with scutes developed from its ribs.

The leatherback is the exception once more because it displays a leathery skin; however it measures the largest sea turtle at 2 meters in length and weighing close to 600 kilos.

Turtles are air-breathing reptiles with some unique biological features. These five turtle features will help underwater divers to identify the seven different types of turtles and sharpen your knowledge of their scientific terminology.

Describing and recognising different sea turtles would be easier to master if there was a single identifying characteristic for each species.

In fact the exception is the Leatherback turtle which is characterized by its body ridges in place of a shell. In general, their head shape, the number of scutes, and the smooth or serrated edge of the shell, identifies the seven different turtle species.