Sea urchins belong with the phylum Echinoderm and inhabit all the warm and cold water oceans worldwide.

Sea urchins - often called sea hedgehogs - also live in deeper water, however their sharp spines cause most concern for divers and swimmers in shallow areas.

The spines protruding outwards from the urchin's body protects themselves from predators and help them for movement around the seabed.

They can grow to around ten centimeters feeding mostly on floating food particles and algae.

Urchins are slow-moving and non-aggressive sea creatures, akin to sand dollars, sea cucumbers, and sea stars, but the piercing external spines that cover an urchin's body is particularly troublesome to swimmers and distracted divers.

Although the needles are not normally venomous, some urchins can produce venom from the base of the spines. 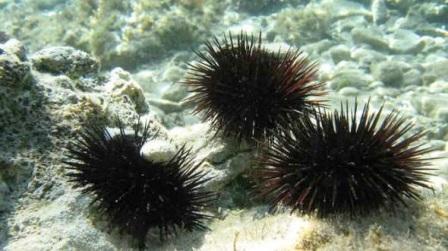 With keen awareness and good buoyancy control, divers will cautiously avoid getting stung by sea urchins.

The sea hedgehogs spend most of the daytime hiding in crevices but some of the species bury themselves in the sand so be careful of protruding spines in the sand.

It should also be noted that their sharp spines can pierce most neoprene wet suits.

If you get impaled by sea urchin spines, they are brittle and easily snap as they puncture the tissue.

Dangers to the victim includes envenomation, infection, and sensitive pain.

The needles are extremely difficult to remove and may stay visible for days or even weeks. Although there are several methods of attempting removal and treatment of sea urchin puncture wounds, if the problem persists it may be necessary to seek medical advice for the injury.

Sea urchins (hedgehogs) use a combination of two potent defense mechanisms. Injuries from most aquatic animals result from the creature trying to defend itself from a potential threat.

Sea urchin spines vary in sharpness and length throughout their species but they all use their sharp stinging needles as their first line of defense.

The needles are usually long, razor sharp and filled with venom but some urchin species have short stubby spines which are not so piercing. Nevertheless, their defense mechanism is so sharp that their spines often pierce a diver's wet suit or neoprene booties.

Some species also use a protection mechanism involving pedicellarines. The purple sea urchin has tiny hook-like structures that inject poison into the skin.

Pedicellarines are located among the spines but when they clasp the skin they release a painful toxin. Despite its rarity, an extreme injury with multiple puncture wounds can produce enough venom to cause faintness, muscle spasms, breathing difficulties, and death.