Their natural habitats are wide ranging, typically infesting reef communities throughout tropical and subtropical latitudes of the Pacific and Indian Oceans.

In fact, the Crown of Thorn Starfish is best known for its battery of long thorn-like venomous spines covering its arms, and its callivorous diet feeding voraciously on Scleractinia - hard stony coral polyps.

The spines are stiff and piercingly sharp situated mostly on its upper surface and away from its mouth (aboral).

Like most starfish, Crown-of-thorns have multiple arms - up to 21 - which are incredibly flexible, prehensile, and radiate in a crown-like shape from a central stomach or disc-shaped soft body.

Some of the largest species often grow to 80 centimeters (30 inches) although the typical size for an adult would be around 30 cm.

The lurid coloring and imposing features of some species are unmistakably recognized as they bend and twist smothering the craggy contours of the coral on which they feed. 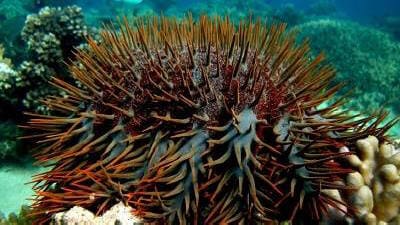 In actuality, the Crown-of-thorns Starfish - nicknamed COTS - causes tremendous harm to large swaths of coral formations and, somewhat interestingly, preying destructively on those which are already stressed from pollution and bleaching.

Current information suggests the sea star’s infestation of some coral communities is mostly attributed to the overfishing of its natural predator.

One of the world’s largest marine snails is the Giant Triton and its decline in numbers provides a thriving opportunity for the Crown-of-thorns Starfish.

In reality, one other animal is associated with the protection of the reef against the Crown-of-thorn obliteration. The coral guard crab - classification in the genus Trapezia - characterizes the symbiotic relationship between its relatively safe cauliflower coral habitat and defending it from those trying to destroy it.

This predator starfish feeds directly on coral polyps in their open environment. The Crown-of-thorn has an ability to invert its entire stomach organs through its mouth. They digest a thin layer of soft coral skeleton and suck down the nutrients.

Conservationists have taken a pro-active approach to the devastation caused to coral reefs by the diet of these invasive and destructive creatures. Fishers and concerned biologists instigated a cull in some areas and made attempts to eradicate the giant starfish in other vulnerable regions by poisoning them.

Nonetheless, some efforts failed because the Crown-of-thorn Starfish is capable of limb regeneration. One interesting fact shows in some cases they can regenerate from a chopped up animal around half of its normal size.

Crown-of-thorn Starfish reproduce through broadcast spawning. This behavior means the male and female of the species release eggs and sperm at the same time in to the water column. Fertilized eggs drift into the tiny crevices of the reef finding relative sanctuary from hungry predators.

The starfish’s spines bend over and flatten if they are removed from water. In fact, the body surface collapses and ruptures releasing body fluid. Interestingly, they fully recover their tubular characteristics and crown-like shape if they are immersed back into the water alive.

Their population ranges from high to low densities which often fluctuates with coral generation. Crown-of-thorns are not edible by humans but scientists are monitoring their environmental status as high numbers in localized areas threatens danger for other species.

Crown-of-thorn Starfish belong with the class of marine animals known as Asteroidea. A starfish sting injury or puncture wound from these bottom dwellers is most likely accidental.

The damage occurs if the spine penetrates the skin or from the gelatinous venom surrounding the needles. Some starfish spines are sharp and long enough – up to 6 cm - to pierce wetsuits or gloves.