There are considered to be almost 100 different species of marine angelfish which do not have the same classification as the freshwater cichlids.

Angelfishes and butterfly fishes are the most conspicuous of typical reef residents.

The largest of the species is the gray angelfish reaching a whopping 60 cm but the majority of angelfishes family grow 20 to 30 cm in length. 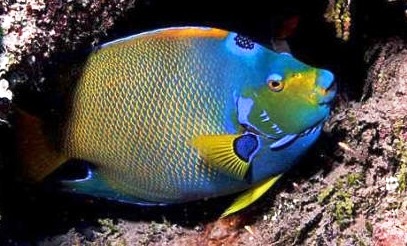 Small angelfish are often kept in tanks or aquariums but they can be difficult to feed and successfully maintain.

The biggest angel fish are quite bold in their natural habitat.

They often swim close to scuba groups and skin divers.

Although some of the larger angelfish are fished for human consumption as food, care should be taken because recent reports suggest that some species are poisonous.