Zooplankton are tiny animals (mostly microscopic) that drift close to the surfaces of ponds, freshwater lakes, and saltwater oceans.

Thousands of zooplankton species perform a crucial role in the food chain. They create a vital link between plants and animals in a range of diverse biospheres.

How Big is a Zooplankton in Micrometres?

In taxonomy, it is the actual size and the developmental stage that classifies different species of zooplankton.

In fact, these tiny microorganisms are heterotrophic forms of plankton. A heterotroph is an organism that does not produce its own food source. Instead, it takes nutrition from other organic carbon sources, such as plant or animal matter.

Because they are sensitive to changes in fragile aquatic ecosystems, scientists use certain facts about zooplankton species to detect the effects of environmental disturbances.

There are many animals listed in the group of zooplankton. But, having a long antenna on top of the head tends to be a common body shape that many share as a characteristic.

Their body is usually elongated and cylindrical in shape (like a torpedo) with some kind of external shell for added protection. The species that do have legs will have a few pairs of leafy extensions.

A Measurement of Biological Condition

Zooplankton are very responsive to the nutrient content in rivers and oceans. Thus, they can highlight important changes that result in different types of underwater pollution.

So, because zooplankton serves as an important measure in the biological condition of a water body, some of the data that scientists collect and monitor will include:

Note: The PADI AWARE Foundation is a growing, popular movement of scuba divers and other volunteers who continue in their efforts to protect and conserve the ocean planet.

What Do Zooplankton Feed On?

Zooplankton have more than one successful feeding strategy. In the main, they are filter feeders - meaning they strain floating food particles from the water column. 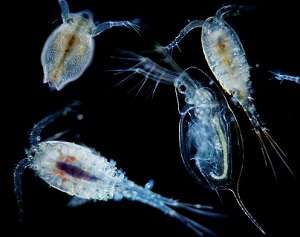 Most of the tiny organisms have feeding appendages. The feature enables them to sieve algae, bacteria, and other fine particles suspended in ocean currents.

For example, the Cladocera (water flea) is one of the indiscriminate grazers in the zooplankton species. They use a unique 'raking' strategy to filter out food particles.

In comparison, Copepods are one of the most selective of the species. The small marine crustaceans will pick out individual pieces of food to satisfy their diet.

So now you may be wondering, what is zooplankton eaten by? In fact, zooplankton's natural predators are bigger examples of the same species along with aquatic insects, most fishes, and large whales.

Zooplanktons are also recognised as predators and they will feed on smaller zooplanktons. Generally, they devour their prey based on its size, how easy it is to swallow, and what it will taste like.

Plankton refers to the smallest aquatic animals and plants that live and drift in an open water environment (i.e. the limnetic zone).

The basic difference between phytoplankton and zooplankton is the prefix 'phyto' which refers to small plants (e.g. algae, diatoms). Phytoplankton use a process called photosynthesis to get energy from the sun (like plants do).

Whereas, when we use the word 'zoo' before 'plankton' it refers to small animals that are weak swimmers drifting in currents (e.g. tiny crustaceans and fish).

The breeding habits of zooplankton vary in speed and population. The outcome will depend on whether they have favourable conditions (e.g. the season) in which to populate.

When the conditions are optimum, they can reproduce at great speed. During these times, they can increase their population by 30% in a single 24 hour period.

Despite living 'relatively' short lives (i.e. a lifespan of about one month), zooplankton reach maturity at breakneck speed. As an example, Daphnia adult females are able to produce the equivalent of their body mass in eggs every few days.

Fun fact: Some environmental factors tend to influence the reproductive activity of some species. Without this intervention, the Filinia species would cover the entire world in a layer of zooplankton three feet in depth in only 130 days.