Their species includes common names such as sea tulips or sea liver which belong to the filter-feeder group known as Tunicata.

Tunicates often live in colonies or zooids but some species exist as solitary individuals.

The sea squirt is a globular or cylindrical shaped soft-bodied invertebrate.

They bodies are flexible and shrouded by a transparent tunic often reaching 18 cm in diameter.

Adult sea squirts develop two siphons usually near to the highest part of its sac-like body.

The siphon structures suck and expel water during respiration, feeding and for defense purposes. The process is known as inhalant and exhalant siphoning. 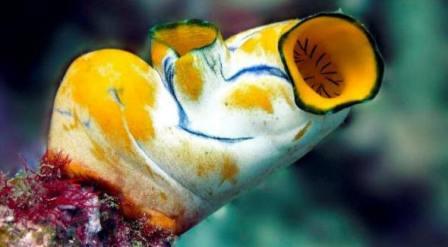 Using their pharynx, they filter plankton food from the water drawn in by the siphon.

Asexual budding produces a fresh outgrowth which eventually develops into a replicated sea squirt to join the colony or zooid.

They mature after a few weeks of swimming freely at which point the notochord disappears.