Bristle worms (Serpulidae) are typical free-living segmented Polychaetes which are usually seen living in rocks or in the substrate of the sea floor.

They are seldom seen in daylight (nocturnal) unless they are disturbed.

Their elongated bodies range from a few centimeters in length up to 30 cm long.

Each segment of the bristle worm's body contains twin appendages and covered with bristles or tufts called setae.

Large bristle worms tend to be brown or dark gray in color whereas the smaller species are usually bright pink with white flecks.

Bristle worms are meat scavengers feeding on almost anything that dies near its habitat. Their preferred diet is dead fish, often bigger than they are, and clams. 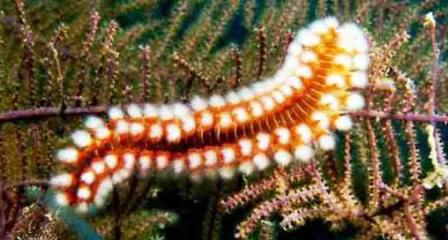 Bearded fireworms are found cleverly camouflaged in coral systems chiefly in the Caribbean and the tropically warmer regions of the Atlantic Ocean.

They are brightly colored to match their reddish and brown coralline surroundings.

For the most part they thrive best in shallow waters but they have been seen in depths deeper than 40 meters.

Your biggest concern should be not touching the fuzzy bearded fire worm's bristles. The white bristles contain formidable venom which burns human skin and are as sharp and brittle as porcupine quills, although much smaller.

The worm puffs out its bristles to deter danger. Although they are infrequently considered to be aggressive towards scuba divers, the best advice is not to touch them, particularly with your bare hands.

Surprisingly, some are capable of piercing human skin but you should find pierced or stuck bristles relatively easy to remove and peel away from your skin using strong sticky tape. Larger worms have the largest bristles and in fact they also have jaws with which they can bite.

The worms are nocturnal and usually hide asleep under rock crevices and rubble deposits in the daytime. Nevertheless, beady-eyed divers may see a furry bearded fireworm siphoning small animals from rocky coral turning the tip to white color as it dies.

You should not be surprised to learn that the bearded fireworm is so-called because of the burning venom from its stinging hairs. If it stings you the area feels like it is on fire and usually lasts for a few hours.

The hollow spiny hairs snap off really easily and become stuck to your skin. They release a neurotoxin which creates the sting and flaming sensation. Other stung symptoms are rare but include skin irritation, dizziness, inflammation, numbness, swelling, and redness around the affected area.

First aid for stings from bearded fireworms means first removing the spines from the injured area. The hairs are minutely small and almost transparent.

If your diving first aid kit has tweezers you may be able to remove them individually but if not you could use sticky tape to strip them from the skin - similar to skin waxing.

Vinegar, hydro-cortisone cream, or rubbing alcohol may help to reduce the burning sensation. Use a topical antibiotic if you suspect infection and ibuprofen should reduce the pain. If you wound deteriorates you should consult a medical expert in marine life injuries.