The anatomy of a jellyfish is like no other free-swimming marine animal.

In fact, even though the anatomies of jellyfishes all share a similar shape and internal workings, it is the absence of any specialized interior bodily structure and the presence of gelatinous external composition which renders the jelly phylum Cnidaria significantly different from their counterpart aquatic invertebrates.

Jellyfish body parts, and their physiological adaptations to their natural habitat, acquires extensive research by marine biologists, and yet there are some who still wonder how a slow swimming organism without a brain or heart can actually live?

Essentially, it is a mass of trailing tentacles dangling beneath a pulsing mesoglea, a bell-shaped hood, that differentiates jellyfish anatomy from other sea creatures.

Perhaps the most surprising fact is that they are the oldest multi-organ animal known to mankind, and these blooms of water-filled ‘umbrellas’ have been pulsating their way through deep saltwater oceans and bodies of shallow freshwater for more than 500 million years. 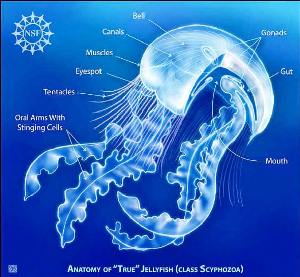 Most do not even have typical respiratory or circulatory function, and ‘incomplete’ digestion is performed inside a single gastric cavity or stomach pouch (gastrodermis gut) - called a coelenteron.

They are commonly identified by their umbrella mass and the shape of their protruding manubrium. The manubrium is a trunk-like structure which hangs below the central part of the balloon-shaped bell.

Essentially, this stalk supports a number of oral arms (tendrils) and radial canals which connect the creature’s mouth (which also functions as its anus) to the bottom and underside of the hood.

The most venomous jellyfish species contain stinging nematocysts which are toxic capsules coated to the surface of their oral arms.

When Cnidarians hunt for food, thousands of microscopic toxins called 'cnidocytes' are triggered and fired into their prey – mostly small fish and animal zooplankton - which ultimately paralyzes it and causes its death.

By comparison, and much less risk to humans, the moon jellyfish has one of the weakest stings in the classification.

The bell also provides axis support for its stinging tentacles or lappets. They have between four and eight oral arms which they use to capture and maneuver food to their mouth orifice.

Despite having limited control over their movement in water, most jellyfishes use their hydrostatic skeleton to create a type of jet propulsion and move around.

These passive animal drifters achieve locomotion by creating a pulsating rhythmical movement through the water column.

Therefore, ocean currents greatly influence their motion but there are some species which actually travel by physical attachment to other floating materials - seaweed for instance.

Bell heights range from as little as one millimeter up to 2 meters and many of the larger species reach the same size in diameter. The largest of all is highly toxic and commonly known as the ‘lion's mane jellyfish’ or in scientific taxonomy ‘Cyanea capillata’.

Found mostly in Japan, the Nemopilema nomurai is understood to be the heaviest of the species and can reach colossal body weights in excess of 200 kilograms.

The facts are not totally clear how jellyfish interpret visual stimuli or see things. They have eye spots but they do not have sensory organs or a brain to process the information.

Scientists believe that image processing involves a nerve ring found in the epidermis. This is the closest resemblance to a central nervous system and it appears as a ganglion-like feature - sometimes called the ‘nerve network’.

You are unlikely to see them, and it’s probably better if you don’t, but in fact jellyfish do have light-sensitive eyes. They lack any ears, a nose, or a recognizable head.

Their spineless body does not contain any bones whatsoever and these non-polyp invertebrates are constructed almost entirely from water - around 98%.

Perhaps one of the most developed jellyfishes for advanced vision and odour detection is the cubozoan box jellyfish. Chironex fleckeri are more commonly known for causing severe and painful allergic reactions in humans from the toxicity in their sting.

Nevertheless, the species have two different forms of sight which actually total 24 eyes. One set of rhopalium is capable of processing color and form images with a unique 360-degree all round view of its environment.

It is difficult to digest food without the proper organs for digestion such as pancreas, intestines, and liver. In fact jellyfish possess a simplified and ‘incomplete digestive system’ which means they use the same single opening, called the gastrovascular cavity, for food intake as well as for depositing waste substances.

Cells produce digestive enzymes which break down food substances inside the stomach pouch and help them to absorb the nutrients. These carnivores dispose waste relatively quickly through this cavity to avoid carrying around too much bulk and risk problems staying afloat in the water column.

Jellyfish cannot survive out of water and they rarely live for longer than a year, even in their natural environment. Sea turtles, large fish such as the ocean sunfish, and some birds prey on jellies.

Nevertheless, perhaps the biggest predator of the species, and one which devours the contents of jellyfish anatomy the most, is other jellyfish. Yes they really are cannibalistic creatures!