The Box Jellyfish is a free-swimming cnidarian invertebrate and a carnivorous animal.

The box jellyfish species (cubozoa) is easily distinguished from other jellies by its cuboid medusae - cube-shaped body.

Despite their infamous notoriety, not all box jellyfish species are poisonous.

Nonetheless, the deadly breathtaking toxins from Chironex fleckeri make it one of the most venomous of all creatures on earth.

They exist primarily throughout the warm ocean currents of the Indo-Pacific regions and the northern coasts of Australia.

They often weigh more than two kilos and generally live for about a year. They feed on small fishes and shrimps using their delicate yet powerful paralyzing stinging barbs and deadly venom for defense and to stun their prey followed soon after by death.

Their main predator is the sea turtle which is unaffected by the box jellyfish's poisonous stinging tentacles. 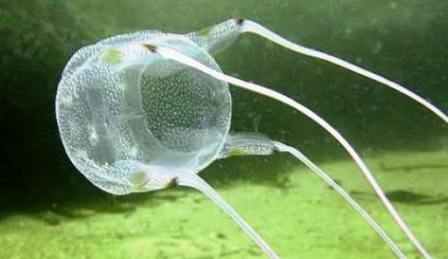 The venom of the box jellyfish ranks among the world's most deadly toxins which attack the victim's skin cells, the heart, and the nervous system.

Their box-shaped bell is usually transparent and pale blue in color.

They have up to 15 long dangling tentacles flowing from each corner which contains around 5,000 stinging cells or 'nematocysts'.

Surprisingly, the cells are fired by contact with a chemical and not by touch alone.

Despite not having a central nervous system to process what they see, their eyes have an advanced retina, cornea and iris with a sophisticated lens. The eyes are grouped in clusters located on each of the four sides of the bell.

They move and drift in water different from most pulsing jellyfishes. Box jellies can propel themselves through water jetting around seven kilometers per hour.

The quantity of venom that the victim is subjected to correlates to the extent of the damage received and the seriousness of the injury. The box jellyfish species Chironex fleckeri is attributed to more than 100 known deaths.

This jellyfish has toxins so immensely poisonous, marine biologists suggest that one death-dealing animal can kill 60 adults.

In fact, biochemists have discovered exactly how the Chironex fleckeri delivers its fatal venomous sting. The lethal blow is delivered by a proteinous chemical which makes the victim's cell walls to leak potassium directly into the bloodstream.

Urgent medical attention is needed after being stung by this box jellyfish. You can treat the wounded area with vinegar to reduce the pain and to inhibit firing of further nematocysts.

Use tweezers or gloves (not bare hands) to remove the visible tentacles. You should contact EMS while monitoring the victim's vitals and administer CPR if necessary.

Despite knowing that the Chironex fleckeri might be present in your favorite dive site, you might not necessarily need to cancel your dream diving holiday to the Great Barrier Reef. Jellyfish stings need pressure and a chemical on the skin to trigger the nematocysts.

Without direct contact with the chemical, the tentacles do not fire the stinging cells. Try to cover all bare skin as much as possible with a full body wet suit or dive skin with booties and gloves.

Curiously, biologists have found that almost all jellyfish dislike the color red. Red wet suits are not popular or fashionable but you could wear a red rash guard, skin top or your favorite red t-shirt over your normal thermal protection.