Their smooth textured yellow or buff colored colossal stone structure extends up to five meters across and usually hemispherical shaped.

The hard coral genus Porites represents the most prodigious of all stony coralline formations.

Despite their exceptionally sluggish growth rate; often less than one centimeter per year for some porites; the tall giants of seven or eight meters high rank among the oldest and most established of all earth life forms.

Coral Porites colonies may appear to be one single structure to the untrained eye but in fact they are a skeleton of countless anemone-like animals.

The colony of coral polyps often called the 'Jeweled Finger' displays finger-like morphology that develops from an individual base framework.

Some are flat and featureless. Others are hemispherical or almost completely spherical and then there are branching tentacles which appear to be almost tree-like.

The tissues of their polyps contain zooxanthellae which produce nutrition for the polyps and in return the microscopic algae receive a safe access to strong sunlight.

Despite most coral species being hermaphrodites possessing both gender's reproductive organs, male and female Porites corals exist in colonies separate to each other. 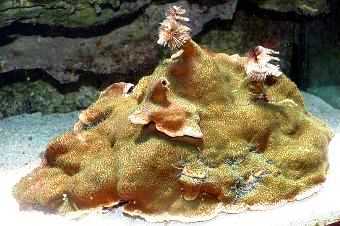 The free-swimming male sperm must reach the female colony for fertilization to be successful. Larvae develop inside the female's cavity until the brooding corals are released to settle in the nearby environment.

Like most of the earth's corals Porites continue to suffer the affects of ocean pollution, devastating starfish invasions, and climate change.

The main difference is the time they need to recover from these threats. Porites coral's slow recovery rate threatens their entire species if current global trends are left unchanged.

Sadly, Porites have another wide-ranging threat to cope with. Worldwide collections of live and dead corals have lowered in recent years but the aquarium trade and bio-medical industry still add to the global threat to sustainable coral reef ecosystems.

Some protection and part of the solution could be the recent regulatory improvements regarding the International trade in endangered species (CITES) and marine protected areas (MPA).