How do tiny Polyps produce a Magnificent Coral Reef?

Follow this complex information by questioning how they are made and whether in fact corals are actual plants or living animals and we have the recipe for an intense debate.

Google™ the internet for the answer or definition and you might get as confused as we did.

In response to the most frequent questions we get about coral reef formation and how corals grow, we have produced a framework of facts to help explain and describe in simple terms how coral reef systems are formed.

The keyword to understanding how corals are produced is 'symbiosis'. 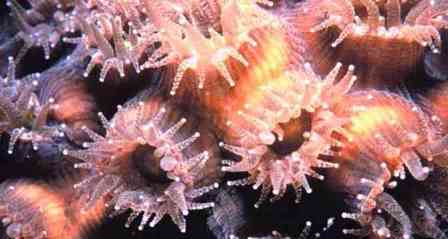 The unique partnership that many oceanic plants and animals share provides protection against predators and a plentiful supply of food source for the mutual benefit of all partners.

These plant-like organisms inhabit the tissues of the coral where they get protection and a food source for photosynthesis.

Algae photosynthesize their food using the coral's waste products and in return they supply the corals with organic products for food, removes their waste, and provides the coral with a supply of oxygen.

In fact stony coral is a structure comprised of thousands of polyp conglomerates which are tiny soft-bodied creatures that secrete skeletal calcium carbonate.

The hard external limestone skeleton attaches to sold rock formations and continues to grow creating a framework of calcium polyps.

As the polyps die and regenerate, they deposit further layers of limestone creating the typical finger-like shaped coral heads. Some soft coral anemones and sea fans display similar symbiotic relationships within the ecosystem.

Despite not having typical animal features or body parts, corals are considered to be animals predominantly because they are sessile organisms. Sessile means they are permanently fixed or planted in one place and relatively immobile.

The fact that they are rooted or anchored to the ocean floor fools many people into believing that corals are plants. Nonetheless, plants make their own food which coral animals do not.

Some corals rely on capturing water-borne energy rich nutrients using their arm-like appendages similar to tentacles while others feed on unicellular algae.

What Are Coral Reefs Made of and How Are They Formed?

To simplify, healthy coral reefs are millions of brightly colored skeletons formed by calcium-producing sea animals. Sea and ocean temperatures determine where corals form and in which tropical zones they grow. They flourish best in warm shallow conditions because coral animals need water temperature above 65 °F to live.

Therefore, a mass or large group of rounded or finger-branching polyps produces ridges of solidified calcium carbonate and forms a diverse coral reef.

If we have not yet convinced you that corals are an amazing collaboration of living animals and plant life, the fact is they have been around for millions of years and are some of the oldest and largest biological structures on earth.

Despite being vulnerable to environmental stress, some types of coral produce invaluable drugs and important medicines for human diseases.