No matter whether you are a beginner or an experienced diver, the primary reason for scuba diving at Cobia Point is to swim among the large cobias that frequent the area.

This help guide explains how to get to the dive site, average depth limits, and what species of marine life animals you might see below the surface.

Why Should You Go Diving at Cobia Point?

If you travel to the south of Koh Rong Samloem Island you will find one of the popular dive locations at Sihanoukville, in Cambodia.

Most of the local dive schools organise regular boat trips out to this site because it draws in lively gatherings of huge cobia fish species.

Cobia Point dive site is a steep wall dive with almost nowhere for divers to shelter when the currents are running fast.

Thus, it is better suited for divers with the PADI® Drift Certification (or at least some diving experience in strong currents).

The vertical cliff face plunges all the way down to around twenty (20) metres (65 feet) from the surface. As a result, divers with deep diving training will handle depths beyond eighteen metres (60 feet) better than beginners.

Some of the dive sites at Koh Tang Island also contain steep walls. But, this site gets its name because it attracts lots of cobias (also called black kingfish).

In general, most adult cobias will grow up to two (2) metres in length. They display a dark brown appearance with a single dorsal fin. But, the young have black and white horizontal stripes - often with flecks of bronze, orange, or green colouring.

It is easy for novice divers to mistake cobia fish for sharks (they have a strong resemblance to grey reef sharks) or sharksuckers (remoras). In fact, the remora (family Echeneidae) is their closest living relative. 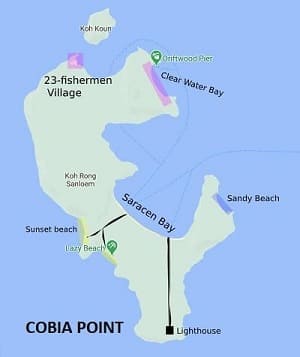 The list of common names for cobia fish species is long, and includes:

Note: Large cobias are inquisitive and often swim very close to divers. In most cases, it will be curiosity - rather than aggressiveness.

Interesting Facts about the Cobia

This robust, yet generally harmless fish, can grow well over six feet in length and weigh up to 45 kilograms (100 pounds). It is common for healthy members of the species to live for up to twelve (12) years.

Female cobias mature around the age of three (3). Whereas, males will mature a little earlier at the age of two (2). Even so, juveniles develop a reproductive system that allows them to start breeding early in their life cycle. Females often release up to 2 million eggs each time they spawn.

Note: There is limited official documentation about cobia's predators. But, we know that the shortfin mako shark (Isurus oxyrinchus) will eat the adults and large pelagic fish (e.g. mahi-mahi) will prey on the young.

Cobias thrive best when they live near large structures in the water, such as artificial reefs and submerged shipwrecks. Once fully matured, they will travel long distances alone or together in small groups.

There are many more dive sites for divers of all certification levels to explore when scuba diving Koh Rong Samloem, including:

Note: Another section explains more about passive interaction with marine animals and the importance of diving safely around hazardous sea life.