Seahorses are small bony fish that live in shallow temperate and tropical habitats.

They are most commonly found hiding in sea grasses, reef systems and mangrove forests.

In fact their diffident nature means they are reclusive and rarely seen in open waters.

The smallest of all seahorses is the minute pygmy seahorse species measuring less than two centimeters and the potbellied seahorse (Hippocampus abdominalis) holds the current record for the being largest (around 35 cm).

The name 'seahorse' derives from a striking equine resemblance to its namesake.

There are about 50 known genus living in the Pacific and Atlantic Oceans and tropical seas around the world, but expert reviews report that the total number of identified species of seahorses remains unconfirmed and closer to 200.

A thin stretched hide covers a number of bony plate rings which construct the main frame of their abdomen. 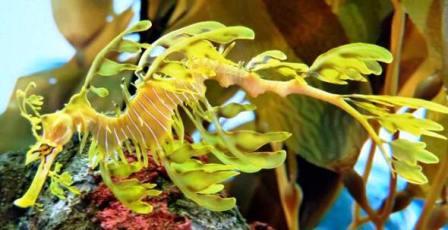 The plates are not fish scales and the quantity is distinctly related to each scientific classification. Somewhat surprisingly they do not have any scales.

Their hard exterior skin consists of tough plates fused together to create their exoskeleton.

This unique assembly of skin and bones determines how seahorses swim.

They do not move through the water horizontally like their closest family group, the pipefish, but seahorses and razorfish both swim in a vertical position.

A small coral net sported above their flexible neck and sturdy head, with long food-sucking snouts, individualizes seahorse species. Differing in size and unique design, its crown is as individual as human fingerprints.

Seahorses have excellent eyesight and their eyes function independently like a chameleon. This means that if one eye looks forward, the other eye can check the surroundings behind them - at the same time.

Add to this an inefficient dorsal fin, an absent caudal fin, and almost rudderless pectoral fins located at the rear of their eyes, seahorses are very weak swimmers.

Seahorses survive by camouflage. Thus, most species live their lives hiding in colorful coral formations. They blend in with similar sized and shaped reef structures and textures of their natural habitat. Whereas other seahorse species change their body tones using natural camouflage for protection.

The dwarf seahorse (Hippocampus zosterae), found mostly in the Bahamas, is the slowest moving fish at snail speeds of 2.5 cm per minute. As you may expect seahorses spend much of their static lives clinging to stationary corals and structures attached by an extremely effective prehensile tail.

Seahorses are monogamous and stay with their companion for life. They mate with only one partner and the courtship display of dancing, changing colours, swimming in tandem, and spinning around each other, often continues for more than 6 hours.

Male seahorses display a brooding pouch at the front of their tails. During seahorse reproduction, the female transfers around 1,500 eggs into the brood sac on the male's abdomen. The male seahorse duly nurtures the fertilized eggs for 2 to 6 weeks until the microscopic baby seahorses appear.

The young are ejected into their new surroundings anatomically fully developed, but incredibly tiny in size. The male is relinquished from his parental duties and often begins to mate again for further breeding activities within a few hours. And so, the reproductive cycle begins once more.