Frogfish - found in most tropical and subtropical waters - predominantly live in the world’s major oceans, namely the Pacific, the Atlantic, and the Indian.

They thrive around deep; hundred meter plus, coral rocky reefs, including parts of the Red Sea.

They prefer water temperatures of at least 20 degrees C. Frogfishes range from less than one inch up to fifteen inches in length.

A little known fact is that frogfish have a natural ability to change their colors, but their stocky spindle-covered bodies are usually combinations of whites, yellows, reds, with black. 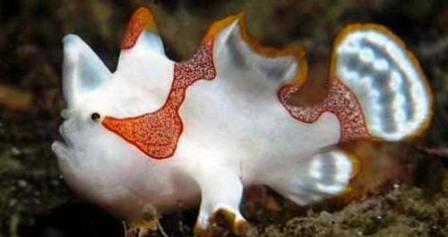 Aggressive mimicry is a defense mechanism that frogfish use to intimidate their predators.

They change their body color blending in almost invisible to their surroundings.

They use this camouflage function to elude capture from their potential predators and to hunt for their prey.

Frog fish are idle. They make very little movement. Their swimming energy is mostly visible while they hunting for food.

The cunning 'blob' fish hunts for prey by nonchalantly drifting towards its victim. When the prey is within range, it attacks and swallows its food within milliseconds, reacts as though nothing happened, and slowly drifts away.

Female frogfishes are not over friendly towards other frogfish. In fact they live quite solitary lives except when it's time to mate. During courtship the female frogfish quite literally releases her charms to attract the male species.

Shortly before the mating cycle the female must alert mating males that she is ready to produce eggs. She releases a strongly-scented pheromone into the water current attracting one or sometimes several excited male frogfishes into the action.

Frogfish courtship precedes the mating but the whole affair is quite messy compared to other fish spawning frenzies. The males battle aggressively with each other often for a few tiresome days of competitive fighting courtship to win the prize of the female's affection.

The males physically and audibly bump and tail-snap each other trying to intimidate the weakest frogfish into surrender. As you may expect the victorious male is tired, undernourished and battered from the battle but his mating requirements remain unfinished.

Frogfish complete the mating process by a somewhat inefficient method of reproduction known as cast spawning. Quite simply, the male and female swim close together and she releases the encapsulated eggs into a cloud of sperm from the male.

The sperm saturated eggs are fertilized and then drift in the current to find safety in the reef. The main advantage of cast spawning is the fast fertilization of huge amounts of eggs that quickly find a resting place away from hungry cannibal fish and predator creatures on the reef.

It is our understanding that frogfish are free spawning, though research continues into their reproductive systems. The female lays tens of thousands - often more than 50,000 - of minute eggs (around 0.03 inches in size) and the male will fertilize them.

It takes around five days for the juvenile frogfish to hatch. Facts suggest that the success rate for frogfish mating is very low. Frogfish are quite rare sightings even though the females may mate several times a month.