Cleaner shrimp species include a long list of swimming decapods.

They are vertebrate crustaceans and as its name implies they are essential cleaners.

There are three cleaner shrimp families and they all diet on parasites that live in or on fish and other organisms.

Cleaning fish symbiosis benefits the recipient with a free and safe nutritional meal and the donor is relieved of unwanted and potentially harmful ectoparasites. It is a perfect example of a symbiotic relationship between two consenting parties.

Most reef systems have a designated cleaning station where both cleaner wrasse and cleaner shrimps care for the local fish clients.

In fact as a willing client approaches the cleaning station the shrimps attempt to attract 'business' by making a shrimp dance in a side to side rocking motion. The hungriest shrimps rock energetically with an increased frequency in an attempt to win the feed. 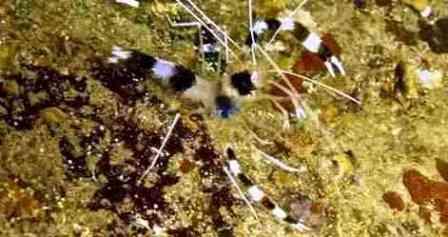 Banded Coral Shrimps grow up to 10 centimeters in length. The male is smaller than the female which has greenish ovaries within its carapace.

They are a monogamous territorial species occupying a circular area less than 2 meter.

The shrimp is mostly pink and white with occasional red bands across its body which displays defensive short spines.

They have four elongated white antennae protruding from their head. The main front leg pairs develop forceps which the shrimp uses for fish cleaning.

Banded Coral Shrimp often live up to three years and have no known natural predator but they use their tail to flip themselves from danger. Periodic molting means any lost or damaged limbs are easily regenerated at the next molt.

They are crepuscular, meaning they are most active at dusk, when they wait patiently - upside down - for fish to swim by for cleaning. Their shake dance indicates that they are willing to clean. They are also known to eat other small crustaceans and worms.

Prior to breeding the male coral shrimp displays his courtship ritual by dancing for his mating partner. The male donates his sperm sack to the molting female. She then inseminates the eggs and attaches them to her abdomen. Two weeks later the eggs hatch but remain adhered to the female for a further 6 - 8 weeks before being released into the plankton.