Nevertheless, during their reproductive habits, male and female worms do not actually make physical contact with each other.

Keeping some distance apart, they both release their spermatozoa and eggs into the breeding habitat without leaving their burrowed tubes.

Attempting to increase the chances of successful fertilization during reproduction, all Christmas tree worms spawn the water together around the same time.

The embryos take around 24 hours to develop into larva which then drifts freely in the water column. The larva settles on coral where it begins burrowing and tube-building to create a new home.

From this point the baby Christmas tree marine worms must go through stages of metamorphoses until they finally become adults. Spirobranchus giganteus are sexually reproductive and have the individual male and female sexual organs.

They are sexually dimorphic and breed by a process called broadcast spawning.

They both release their reproductive cells (gametes) into the water column simultaneously to encourage fertilization. The adult worms have no further function in the reproduction cycle after the gametes have been released into the open water environment. 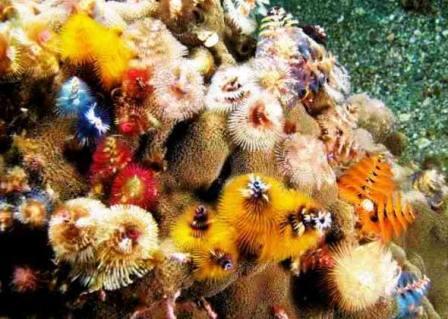 Despite having two distinct sexes of male and female (gonochoristic), some of the genus Spirobranchus possess both sex organs (hermaphrodite).

First, they tend to form huge colonies aggregating in specific areas rather than random scattering around the reef.

Secondly, the species usually spawn simultaneously and in sync with changing tides.

Naturally, the life cycle of the spirobranchus worm begins with the larval stage. The larvae feed on microscopic plankton for a few days until they locate a stony coral head. The second phase begins as they morph into adult form.

Adults burrow a permanent tube in rocky porites and begin their adulthood lives. The colorful life-span of Christmas tree worms are distinctly dependant on their habitat. In coralline areas with optimum environmental conditions, their life expectancy is in excess of 30 years.

Consequently, their life-span is much shorter in regions of poor water quality or distressed or disappearing coral habitats. They have two habitual requirements to survive a long life, plankton and coral.

The marine worm digs a tube in the coral where it remains for the rest of its life. They extend their colorful tree-like structures to feed and breathe and if they have quality water, healthy coral, and plentiful plankton they need nothing else to live.

Planktonic Larval Stage The planktonic larval phase is the first of the two-stage metamorphosis of Christmas tree worms. It is significantly called the planktonic stage because it means larvae survive by feeding on plankton.

The short larval dispersive period typically lasts for a few hours up to a few weeks ending when the larvae have located a suitable substrate site in which to settle and continue its benthic existence.

Important chemical and physical cues in the local environment affect the site selections. Chemical factors such as juvenile hormones and physical cues like hydrology often determine where larval worms colonize.

The momentous morphological change that occurs after the larvae have settled on coral substrate is truly amazing and apparent. The physiological process is called metamorphosis and transform the tiny larva into a benthos juvenile.

Christmas tree worm juveniles produce a carbonate and mucus tube and continues to grow inside its 20 cm calcareous home. Despite appearing to be a hole boring animal, the tube-dwelling worm purifies sand particles into calcium carbonate through a special internal gland.

Excreted calcium creates the cylindrical tube which is often much longer than the actual worm's body length. Should the burrow become damaged the Christmas tree worm has an extended protection to safeguard its survival.

Christmas tree worms make an awesome display of color and a fun feature in any domestic aquarium. Their vibrant hues and intense coloring with their fun 'xmas-tree' shape complements all fish tanks.

There is little accurate information about the typical life-span for captive Christmas tree worms. Reports suggest that their longevity varies according to the quality of their artificial habitat and environment.

Attempting to keep and care for S. giganteus in home aquariums is sometimes challenging because they often struggle to exist on artificial coral.