This general term is used because of the manifestations and management of the two disorders are often identical due to the difficulty in distinguishing between them.

Decompression Illness is caused by the presence of gas bubbles in our bodies.

Bubbles can enter the bloodstream if a pressure build-up in the lungs forces air from the lungs into the blood.

This is known as arterial gas embolism and can result from breath-holding or inadequate exhalation on ascent; or trapping of air in the lungs due to asthma, mucus, water inhalation, laryngospasm, cough or cold.

On the other hand, the bubbles in the blood and body tissues can result from excess nitrogen (or another inert gas) from inadequate decompression after a dive. This divers' disease is known as decompression sickness or often called - 'The Bends'. 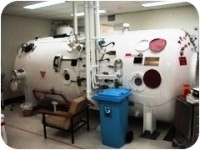 DCI can and does occur on dives that are well within the no stop limits of dive tables and dive computers because they cannot accurately predict the formation and distribution of bubbles in our bodies.

Bubbles in the blood and body tissues can block or damage blood vessels, reducing the blood supply to various parts of the body.

They can also interfere with nerve function and cause undesirable chemical changes in the blood which further reduces effective circulation.

The following predisposing factors may increase a diver's likelihood of getting decompression illness;

Although these usually occur within six hours of diving, they may also develop 24 to 48 hours after the dive, or even later if there is altitude exposure.

Even though the symptoms of DCI sometimes disappear spontaneously, particularly if oxygen is breathed, medical consultation, evaluation and usually re-compression are required to minimize tissue damage and later recurrence of symptoms.

Other Signs and Symptoms of Decompression Illness

Intravenous (IV) fluids are preferable. Oral fluids are given only if the diver is conscious, stable and is not suffering from stomach pain, nausea or vomiting and is able to urinate. Record the amount and type of fluid given. Record urinary output and check for bladder distension.