Why do divers need scuba cylinders and tank valves?

Scuba Cylinders and Tank Valves have a similar purpose and function which is to supply the diver with a breathing gas while he's diving.

The compressed high-pressure air is safely stored in a cylindrical metal container usually on the diver's back attached to the buoyancy jacket.

The valve is attached to the neck of the scuba tank and its main purpose is to control the air flow from the cylinder to the first stage of the regulator.

A scuba tank, also called a scuba cylinder, is constructed out of either steel or aluminum. Aluminum tanks are more common and less expensive, but more prone to denting and wear.

Most dive gear shops will only have aluminum tanks for rent, so it is good to become used to their size, weight, shape and buoyancy. Steel scuba tanks are a little more expensive, but they are far more durable.

It is said that a properly maintained steel tank will last longer than the diver who wears it. The disadvantage with a steel scuba tank is that it will rust and they need to be inspected periodically for rust, but rusting can be somewhat avoided with proper care. 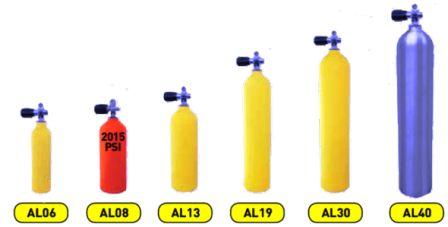 Scuba cylinders are available in a variety of air capacities, pressure ratings and sizes.

You may wonder how long 12 liters of compressed air inside a scuba cylinder will last underwater.

There are many factors that influence the rate of air consumption, but generally a 12 litre tank of air is about the same amount of air as a walk-in wardrobe.

The air pressure increases as it is compressed inside the cylinder during the filling process, most typically to 200 bar or 3000 psi. Scuba cylinders are made of Aluminum or Steel and both types are subject to regulations of government agencies.

The regulating agencies require cylinder manufacturers to stamp specific information onto the cylinder neck. These markings should indicate the type of material that the cylinder is made of and also the maximum pressure that is permitted inside the cylinder - working pressure.

Additional scuba tank markings could include an identification serial number, dates of all hydro-static pressure tests and a symbol that might identify the cylinder manufacturer or distributor.

Divers often wonder how can you identify a din tank valve from a yoke valve? The K-valve is a simple on/off valve and usually made from chrome-plated brass. Cylinder valves can be identified as a yoke assembly or DIN (Deutschees Institut fuer Normung).

The yoke valve is more commonly used by recreational divers globally with the DIN system being a popular screw type assembly in many European countries.

Both valve assemblies require an O-ring to secure an air tight seal so this should be checked as part of your equipment setup routine.

A burst disk is usually made from copper and adds a safety feature to the valve. The purpose of burst disks is to relieve cylinder over pressurization of the cylinder during the filling process or if it is exposed to excessive heat.

If the pressure inside the tank gets too high the burst disk will rupture and release the pressurized air before the cylinder would explode.

Scuba cylinders are cylindrical shaped to increase their structural strength which makes them heavy and unstable especially when they are standing upright. Always secure unattended and upright tanks or lay them down horizontally and block the cylinder when transporting them in your car.

Rinse cylinders and valves with fresh water after the dive and store them away from direct sunlight. The best way to keep moisture out of the scuba tank is not to let it drain completely and always leave around 20 bar of air inside.

Have it refilled if the air remains inside for more than six months as it can turn stale. An annual visual inspection inside the cylinder and periodic hydro-static pressure testing by a trained technician will check for early signs of internal corrosion and always follow the manufacturer's guidelines.

Scuba Tanks, also called cylinders, are normally constructed from steel or aluminium, with the main difference being that the wall thickness of aluminium tanks is much thicker than steel cylinders. Because steel tanks are also heavier in weight, they tend to retain their negative buoyancy towards the end of the dive even after the air has been used by the diver.

This means that in general, divers need less scuba weights when diving with steel cylinders to descend, as opposed to aluminium tanks which can become around 2 kilos more buoyant.

The valve assembly consists of either the popular ‘Yoke Valve’ or the less common ‘DIN Valve’ mainly used by technical divers and during cave diving activities.

Aluminium scuba tanks are more widely used by dive centers in humid climates, mainly because they are less expensive and they tend to oxidize (rust) much slower, however they are more prone to damage because the metal is much softer.

As most dive shops commonly use aluminium tanks for rentals, it's a good idea to become familiar with their weight, size, shape and buoyancy characteristics.

Though they are more expensive, steel cylinders tend to be more durable and long lasting under normal conditions with proper maintenance. However a disadvantage may be that steel tanks tend to oxidize quicker (rust) and therefore need regular visual inspections.

Scuba Tanks have designated markings - scuba tank markings - which denote the material it’s made of, its working pressure and usually the date of its previous hydro tests. Hydrostatic testing is the process which verifies (or not) the integrity of the metal for safe use.

In many countries this is required by law every four or five years. Although they are available in different sizes, most scuba tanks are filled with an air compressor to a working pressure of 200 bar (2900 psi) and can be rented from the Filling Station of most Dive Centers providing that you have some proof of a Diving Certification.

A diver needs a safe supply of compressed air to breathe from underwater and the metal scuba cylinder fits this purpose. The two most common materials used to make scuba cylinders are steel and aluminum with different advantages for each.

Popular sizes are 12 and 15 liters. The scuba tank also needs a valve to control the flow of air from inside the cylinder to the divers' regulator. Most divers use yoke valve assemblies for ease of fitting. The alternative - DIN valve – has an advantage at higher working pressures.

Tank Tip - One kind of scuba cylinder becoming increasingly popular is the pony tank. A pony tank is a little extra tank which straps to your gear, which has separate staged regulators and sometimes gauges as well.

In the unlikely event that your equipment malfunctions or you misjudge your air consumption the pony contains enough air to do a proper slow ascent to the surface. A pony tank is usually carried as an emergency backup air supply, and not as a means of extending a dive.