The most recent statistics for scuba diving fatalities show a surprisingly low count when compared to many other popular sports and pastimes.

In fact, other than being attacked by a big shark or some other nasty sea creature, there are few 'real' accidents in recreational and technical scuba activities.

How Many Scuba Divers Die Each Year?

The "DAN Annual Diving Report" underlines the number of recreational diving fatalities by region and country.

It also highlights how many of the circumstances and associated risks could have been reduced - or avoided altogether.

Describing known facts about scuba diving deaths each year is one of the key roles of the Divers Alert Network (DAN).

As a result, all divers should carefully consider the diving decisions that they make and take greater care in the water.

So, how dangerous is diving? Well, it is a 'relatively' safe sport when it is undertaken in a responsible manner. Even so, there is a lot more we need to do if we want to make dives free of accidents, scuba diving related injuries, and fatalities.

DAN's data collection process starts when a diving death has been identified. In most cases, identification arises through scuba news stories, forums, internet alerts, or from affiliated organizations (e.g. members of the public, county medical examiners).

According to DAN, the geographical and seasonal distribution of scuba fatalities in 2018 was 169 diving deaths (reported worldwide for incidents involving recreational scuba). In fact, that figure increased by 33% from the previous annual rate.

Further reports suggest 78% of recorded and known cases were male and 12% were female (USA and Canada).

Important: Divers can avoid some of the most severe risks by adhering to the number one rule of scuba diving!

The fatality rate shows that scuba deaths are 'comparatively' uncommon. Even so, most of the mishaps occur as a direct result of lack of concentration, overconfidence, or sheer negligence.

One noteworthy statistic in dive deaths is that about 50% of those recorded were for divers who had made less than twenty (20) dives.

This statistical analysis hides the basic fact that 50% of the deaths were associated with divers of some experience (i.e. they had already logged more than 20 dives.) 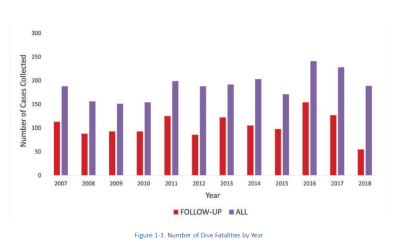 The exact numerical input for the 50% remains a little unclear. So, was it for a fewer or greater number of each level?

What is worth noting, however, is that serious injury or even death can happen to any diver of any certification level.

Statistics equating scuba diving deaths per year with other accidents resulting in death (e.g. road deaths), are pointless and prove nothing.

Thus, it may be more important to take note of the insurance companies. Most of which place scuba diving near to the top of dangerous sports/pastimes. Yet, the United States Parachuting Association disclosed that skydives end in a fatality more often (when compared to scuba deaths per year).

Last time we checked, the risk of dying from scuba diving activities rate at one (1) in every 200,000 dives. That sounds like a risk worth taking!

Note: The chart shows distribution by dive certification level for the United States and Canadian scuba fatalities in 2016. It points out a striking similarity in the number of recorded decedents of student vs. technical divers.

How Do Scuba Divers Die?

You may now be wondering 'what are the odds of dying while scuba diving'? Information and data from the "Diving Medicine for Scuba Divers" showed:

Note: Despite being mandatory in most countries, we always recommend having adequate insurance cover for scuba divers.

What then, are the typical reasons for mortalities? In fact, there is rarely a single determining factor that actually causes diver deaths.

More often than not, there are multiple factors - interwoven and intrinsically linked. Together, they can deteriorate and turn an 'incident' into a catastrophic death!

In fact, this disastrous thesis is borne out by the well-respected Director of Research at 'DAN' - Dr. Petar Denoble, who suggests:

"Whilst each accident may be different, and some occur in an instant, most can be represented as a multiple chain of events that lead to a deadly outcome. Removing any link from that chain may change the outcome."

In normal circumstances, these conditions would be somewhat controllable - or at least not subject to intense medical attention.

If we take a closer look:

They include the usual array of lifestyle complaints, such as obesity, high blood pressure, and heart disease. Even lesser complaints like the common cold can also take on a new mantle with in-water activities.

Diving and having a heart attack is one of the health issues recreational scuba divers should be most concerned about. You might expect that decompression illness (e.g. the bends), or an air embolism would create the highest risk of mortality for divers.

In fact, data from the Divers Alert Network (DAN) suggest that cardiovascular disease is the cause of 15% of scuba fatalities. CVD includes significant medical health problems, including:

Furthermore, elevated cholesterol levels, age (40+), and smoking, are all attributed to the most common risk factors. In addition to taking frequent medical evaluations, other risk-reducing steps include:

A wide range of potential problems can give rise to extreme distress. Typically, they include too-quick ascents (or descents), insufficient air supply, and not being able to gauge a proper response - frequently due to panic.

Often, the result will be a rapid ascent. Experts have cited this as a major contributory factor resulting in the diver deaths that they investigated.

Events which act as the trigger can be attributed to poor experience, and in some cases, super-confidence in one's ability (e.g. negligence).

Why is this important?

In a nutshell, it means you are diving beyond your limit. It may be in varying situations (e.g. wreck penetration) or at different skill or experience levels.

On descent, gas in the body cavities compresses - upon descent it expands. In extreme cases of rapid descent or ascent, this can cause tissue damage.

Equipment Malfunction or Improper Use

In ideal life, and in proper circumstances, the failure of dive equipment is rarely an issue. Even so, you should never use old or poorly-maintained dive gear.

More often than not, the diver will be unaware of the equipment malfunction or over confident in its use.

Situations can arise that start a chain of events leading to a stressed or panic reaction. Comfort and familiarity with all the different parts of scuba equipment is of paramount importance. Thus, you should be 'at one' with your dive gear.

Note: Another section explains the dangers of 'deadly tank valve turns' and how the practice is often taken for granted by experienced divers.

Floating at the surface of a pool or in open water, such as snorkel swimming, is a pastime enjoyed by many. Being a reasonable swimmer, and staying within the confines of your own abilities, is generally accepted as being both pleasurable and safe. Yet, deadly accidents still happen!

Once you submerge your body underwater, you are not 'swimming underwater'. You have entered an environment for which you and your body were not made.

The 'power' of water is not realized by most, especially people who don't know how to scuba. As an example, those who commit suicide by jumping into water from high bridges, usually die from impact injuries - not drowning.

Submerging your body in water brings about many physical and mental changes. This also applies to people with healthy bodies, even when wearing the very best equipment that money can buy.

So, even modern equipment cannot fully negate the effects of intense pressure. All it can do is make you feel as comfortable as possible with the pleasures of going down in the deep blue sea.

Whatever your diving abilities and experience - as with driving - accidents can and do happen. Accidents do not pick and choose. No one is immune!

Glib statistics can prove or disprove anything. But, an estimate worth taking note of is the fact that there is one diving death per 200,000 dives. Even so, that does not mean you have two hundred thousand lives.

Some will die on their first or second dive. Whilst others, and their fellow divers, may log a few thousand during their lifetime.

And why is this so? Put simply, it is because man will be man, and most men want to go that one step further than before! It is part of human nature.