Koh Chang in Thailand will be having a new wreck on the 16th August. Why not book a dive holiday and come and see this beautiful wreck and watch the fish life move in. This is sure to become one of the premier wreck dives in Thailand! 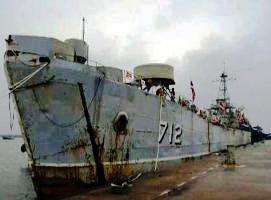 This vessel was built in Philadelphia for the US Navy in 1944 to assist in the Pacific war efforts. The boat was capable of transporting troops, tanks and gear directly to the shores of countries that were engaged in conflicts.

The USS Lincoln County was given the hull number 898 and it's first trips involved the invasion of imperial Japan at Okinawa. She was decommissioned in March of 1961.

For almost 50 years, the tank landing ship provided transport for troops and vehicles for the Navy. 712 HTMS Chang was moored near Bangkok in 2006 and partly gutted out. The Navy then decided to sink it as an artificial reef in the vicinity of Koh Chang island, a popular holiday destination.

It's journey to the Southeastern island (near the Cambodian border) was executed by two tugboats. It arrived on Koh Chang's Navy pier in July 2012.

The Thailand paradise island of Koh Chang is situated to the south of Pattaya and north west of Cambodia. The Koh Chang archipelago offers scuba diving underwater adventures for new and experienced divers combined with superb beach holidays.

The biggest island is a short ferry ride from the Thai mainland and has more than twenty resident scuba schools and dive resorts. The daily boat trips offer divers the full range of 'Discover' programs, PADI Certification Courses and a selection of Technical Diving opportunities.

The small vessel was slowly lowered by floating crane to the bottom of the sea-bed on the morning of the 20th of October. The location is facing Had Nuan Beach on the coral island of Koh Larn just a short boat trip from Pattaya Port.

This new ship wreck in Pattaya is smaller than the other two wrecks - The HTMS Khram and Kood - but it will give local scuba divers an alternative dive site for wreck diving enthusiasts.

Nearly 1,000 endangered turtles have been released back into the waters of the Gulf of Thailand. It is part of a conservation program run by the Thai Navy Sea Turtle Conservation Center aimed at halting the decline in the numbers of green and hawks-bill turtles in the world's oceans.

> What is Ocean Conservation