Lionfish – beautiful to look at – but they cause devastation in the majority of coral reef ecosystems.

They are particularly destructive along the eastern coastline of northern America and in the Caribbean islands.

Governmental agencies in these areas suggest that local divers hunt down and kill lionfish to reduce the problem.

The added bonus for their killers is that this particular genus of Pterois venomous marine fish, are often used in culinary dishes and are quite tasty to eat - apparently!.

Lionfish reproduce at high levels mainly because they do not have natural predators in their usual habitats.

They generally sit at the peak of their food chain, enjoying the unchecked control of its population, creating potential disastrous consequences as the reefs become imbalanced. 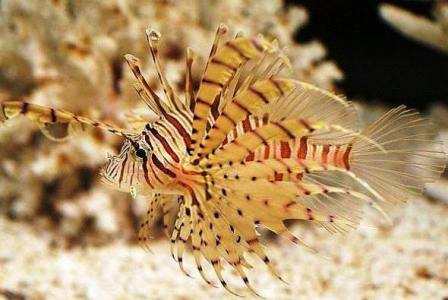 They have an indiscriminate, voracious appetite for juvenile tropical reef fishes.

They are extremely skilled hunters, preying aggressively on invertebrates and most mollusks. They may swallow several different fish species in one complete meal.

When they spawn, the female lionfish ejects large clusters of eggs at once (up to 12,000 eggs).

The male fertilizes them, and the newborn fish hatch around thirty-six hours later. They have no fixed breeding season, and females can repeat the cycle monthly.

Juveniles can swim competently after only a few days.

They are capturing and eating small prey during these first few days of life, and their metamorphosis to the adult stage happens around day 30 of their development.

Characterized by their long spiky fin rays that contain venom, the hostile lionfish is one of the most invasive and aggressive reef fish species. Their venomous spines deter predators from attacking them in their environment.

The poison is fatal on their prey but rarely kills humans. If the sting affects a diver, the most likely symptoms are localized pain, nausea, and fever.

Studies show that lionfish species are responsible for the eradication of most reef fish in the Caribbean and other areas. Although groupers are showing signs of eating lionfish, the general overfishing of grouper species is slowing down the progress of its natural predatory activities.

This is why some agencies are asking divers, anglers, and snorkelers to assist the controlling programs of lionfish populations in designated areas. 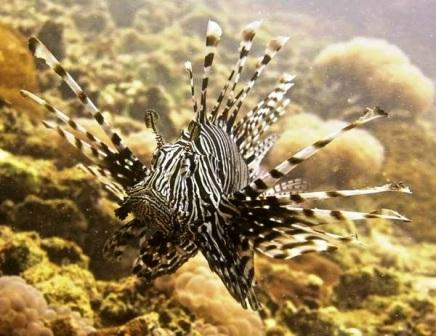 The Lionfish is a spectacularly photogenic and unmistakably popular species.

Nonetheless, in most of the Caribbean and Atlantic marine ecosystems, infiltration and destruction by lion fishes is so severe they have reportedly ravaged and decimated around 80% of the reef species.

Scuba divers are trying to balance the problem by actively hunting, catching, and killing large numbers of lionfish in these areas.

The environmental and governmental agencies strongly encourage and support underwater hunters to assist the mass cull. As a bonus, lion-fish are considered a tasty meal by many fish-loving diners.

Why Lionfish Invaded the Environment

Unconfirmed theories of how the species invaded the local environment blame the devastating hurricane Andrew in 1992. One suggestion is that lionfish entered south Floridian waters via a damaged fish aquarium.

Another theory centers around the same hurricane in which the species were accidentally released while other reports claim that they were deliberately set free.

Four crucial and somewhat surprising factors have influenced the uncontrollable rate of reproduction by lion fish.

Scuba divers, anglers, and snorkelers can help to catch and control lionfish populations in affected regions of the world. Local programs aim to slow down the devastation caused by the unwelcome intruder and allow reef ecosystems to recover from lionfish invasion.