Anemonefish and clownfish derive from the same fish family known as Pomacentridae.

There are 30 recognized species of anemone fishes which practice a mutually symbiotic relationship with sea anemones.

They vary noticeably in size but most anemonefishes posses a general overall coloring of yellow, orange, reddish or blackish.

They may have white bars or patches. The smallest anemone fish is barely 10 cm while the largest might reach 18 centimeters in length.

Clownfish thrive in warm water habitats such as the Indian Ocean, the Pacific Ocean, the Red Sea and the Australian GBR.

They settle near the bottom of shallow seas or lagoons and seek refuge in sheltered reefs. Anemonefish are omnivores meaning that they eat other animals and plants. 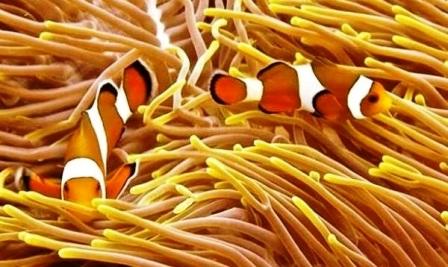 They feed on tiny zooplankton and algae.

They also feed on their host anemone's undigested food and are known to consume anemone tentacles.

Reciprocation is completed when the anemone devours the nutrients from the fecal remains of the clownfish.

Few fish species are unaffected by sea anemone poison. Theories suggest that Amphiprion percula and some Damselfish survive because of a sugar coated mucus layer on their bodies. Detecting sugar instead of proteins means their stinging tentacles do not fire their potent nematocysts (organelles).

Strict hierarchical dominance exists within a colony or group resulting in the most aggressive female securing the top spot. One male and one female clownfish mate through external fertilization.

The fact that they are hermaphrodites means that some males become females when they mature. The most dominant male replaces the top female if she is removed or dead.

Females lay their eggs close to their host anemone. They lay several hundreds of eggs on any flat terrain and coinciding with a full moon. The male parent protects the vicinity until the young fry hatch from the eggs under darkness around 10 days later.