Sponges are the most basic of all aquatic animals and found mostly in warm waters.

The fact that they do not have a nervous system likens them to a plant, however around 5,000 species of demospongiae belong to the Phylum 'Porifera' - meaning pore bearers.

Sponges exist without a head, limbs or any internal organs but their jellylike system of canals and pores are capable of absorbing copious amounts of fluid.

They prefer to live colonially in shallow depths but some species also tolerate deep oceans and muddy freshwater systems.

A young sponge will adhere itself to a submerged rock or another static object by its clinging skeleton.

The skeleton is made of calcium protein fibers (spongin). Sponges are widely used medically for their invaluable sources of antibiotic drugs and cancer-restraining properties. 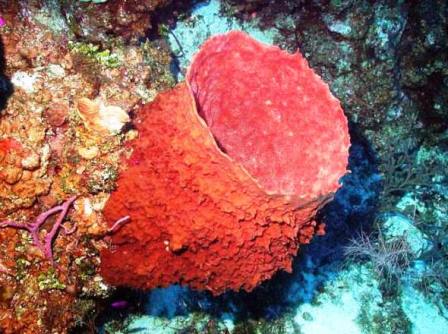 Common colors of sponges are red, blue, yellow and grey.

Others display shades of green on their bodies which is usually a result of algae growth.

The smallest sponge is 5 mm and the largest barrel sponges reach almost two meters in diameter.

Remarkably they restore lost or damaged body parts and has an incredible ability to manifest or regenerate a new adult from these stored cell segments.

Using the sexual process the eggs are fertilized to become larvae. They swim around searching for an object to attach themselves to and then it begins to mature.

If the sponge reproduces asexually the parent sheds away small buds (gemmules) that break off and develop into new young sponges.