They may seem innocuous, but marine cone shell snails possess one of the most deadly venoms known to biological scientists.

The venom contains conotoxins, which cause muscle paralysis, heart failure, and death within minutes.

The deaths are painless because conotoxins produce a painkilling drug.

The sea snails use their proboscis - an arm-like chute - to fire harpoon-tipped poisons into its victim.

The poisonous cone-shaped mollusk injects the lethal sting into its prey and then calmly reels it back for swallowing. The fact is that they are deadly to their prey, but they rarely attack divers.

Marine Conidae are mollusks found in most tropical waters around the world, most commonly around the Indo-pacific region, the Caribbean and along the coast of Florida.

There are almost 500 different species and they have an average lifespan of three to five years. Enthusiasts are attracted to the bright colors and marbled patterns of the shell. 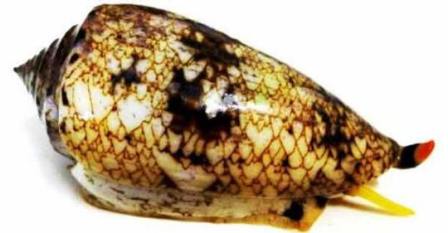 Though it is rare, divers can get injuries from the sting, when handling or attempting to collect cone shell snails.

They are carnivores and kill their prey using poisonous venom. As the scuba sea snail wanders around on the seabed, they search for one of their favorite meals – worms.

They also feed on other mollusks and enjoy eating small size fishes, such as clown fish, gobies and blennies. Its sting uses a harpoon to drug and immobilize the unsuspecting victim.

The force of envenomation from a large cone shell sting is alarmingly dangerous, because it is capable of piercing a diver's wet suit.

A typical jab from a cone fish harpoon is similar to a bee sting. However, the toxin from some larger species is so powerfully poisonous; it can cause serious illness to humans, and even death. Other life-threatening toxic symptoms may intensify over a few hours and include,

Conotoxins block ion channels within the nervous system by interrupting the chemical signals. Cones produce more than one hundred different varieties of toxins, which target specific muscle groups. Some toxins affect skeletal muscles and others affect major organs, such as the heart.

Seconds after the sting, communication stops between the muscle cells, causing immediate paralysis. Not every conotoxin has the same result. Different strains cause different types of paralysis - most commonly excitotoxic shock and flaccid paralysis.

Watch the cone shell sting video in the sidebar to see how excitotoxic shock causes all of the fish's muscles to contract simultaneously. The dying fish and its fins become rigid. Conversely, flaccid paralysis makes the fish 'limp', because none of the muscles contract.

Venomous toxins manufactured inside the venom duct, deliver the lethal sting. The ducts grow up to thirty centimeters, even though the snail may only be a few inches long.

The venom bulb is similar to a small bellow, which contracts to pump the poison into sharp, teeth-like needles, called harpoons. These are stored inside the radula sac.

The dead prey dies and is drawn into the expanding mouth (proboscis) and usually eaten whole. The deadly cocktail of poison, contains a quantity of amino acids, and produces one of the most venomous conotoxins known to scientists.

After delivery of the toxin, the snail has up to twenty more harpoons in continuous development for use or storage.

Apply a pressure-immobilization bandage to an injured limb, such as an arm or leg. Use a thick, clean gauze pad or cloth directly over the affected area. Follow this by tightly wrapping an elastic bandage over the limb. Use caution not to over-tighten the dressing and restrict circulation. Continue applying the bandage over the entire limb and splint the arm or leg to immobilize, if possible. Check fingers and toes frequently for circulation and seek medical attention for the victim.

At the time of writing, there is no known anti-venom. Treatment includes providing basic life support and appropriate emergency care procedures. Scientists are using the venom in some pharmaceutical medicines and drugs.

They are particularly interested in the speed and accuracy that the venom has on the human anatomy and its receptors. Benefits include a lack of side effects when used as extremely powerful, non-addictive painkillers, and in heart rate reduction.

Some drugs from cone snails are used in medicine to treat chronic pain, because it is 1,000 times more powerful than morphine.

A conotoxin-based drug, developed by a team in Melbourne University, Australia, is confident of producing a drug 10,000 times stronger than morphine. Medical researchers are confident that certain venoms may eventually replace morphine as a mainstream pain reliever.

We see many creatures with shells when we are scuba diving in Pattaya. They tend to wander around on the sand near to the coral formations and the most common marble cone snail that we see is the Volute, especially around the islands of Koh Sak and Koh Phai. I have seen a few inquisitive divers pick one up and look inside its shell.

We certainly do not recommend this. Placing them near to your body can be fatal. Our dive briefings include an environmental orientation and we always recommend that our divers refrain from touching anything while diving.