Sand dollars are related to sea cucumbers and starfish but in fact they belong to the order Clypeasteroida.

Common sand dollars are found widespread in intertidal zones and ocean waters of the northern hemisphere.

Some species thrive in tropical zones and the Caribbean Seas.

The 'sand dollar' term originates from its resemblance to a large silver coin. When the sand dollar dies it loses its skin which leaves a large sun-bleached coin-shaped skeleton that often gets washed up on the beach. 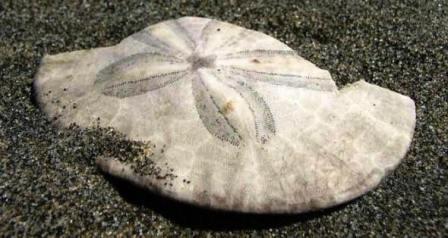 The internal anatomy of a common sand dollar is made of rigid calcium carbonate skeleton (called a test) which is typical of all Clypeasteroida members.

We are working on a Sand Dollar Diagram which will be available shortly.

Common sand dollars use their spines to slowly creep around the sea floor. Tiny hairs called cilia cover the skin and spines and when they die, dead sand dollars lose their textured skin and hairy spines resulting in sun-bleached white.

Adult sand dollars are typical echinoids. They exhibit radial symmetry with five rows of pores which appear in the center of the endoskeleton.

These petal shaped perforations contain podia, which are important for gas exchange, and maneuvering its food along the grooves towards its mouth.

The mouth opening is located at the central point of the star-shaped grooves on the underside (oral surface) of the sand dollar. They feed on small copepods, algae, crustacean larvae, detritus, and diatoms.

Sand Dollar Habitat includes sandy or muddy patches in which to live to live. They congregate together in groups during Sand Dollar Reproduction process in the ocean soft bottom sediment.

When sand dollars reproduce, echinoids release gametes into the water. Gametes are specialized male or females cells, which contain half the normal number of chromosomes.

The gametes unite with opposite sexed cells in a process known as sexual reproduction or external fertilization.

Nektonic larvae can swim independently of the water currents during their metamorphosis stages. In fact, a recent biological study found that sand dollar larvae use asexual cloning as a self-defense mechanism.

As they mature, the skeleton (test) starts to develop and from this point, sand dollars become benthos organisms, meaning that they live in or near marine sedimentary seabeds.

Matured sand dollars have few predators with the exception of their most natural predator the ocean pout (Zoarces americanus). The eelpout and sunflower starfish both feed on sand dollars.