Mercury poisoning or 'lipid peroxidation' affects close to half of a million newborns every year.

Methylmercury is a neurotoxin which damages the brain of a developing fetus.

Mercury contamination levels in some fish species are so high that Doctors advise pregnant women and small children to reduce their intake or avoid eating many of the large predator fishes and some shellfish.

It is alarming how much mercury and toxic metals are released into the air by coal polluters and how easily methylmercury enters the food chain.

Mercury is a natural element but also a byproduct of coal-fired power plants burning fossil fuels. Power stations are responsible for emitting the most toxic mercury into the earth's atmosphere.

If they burn coal unfiltered it also produces other poisons such as nickel, lead, and arsenic. Rainfall releases toxic mercury into the oceans, rivers, lakes, and reservoirs where it is then converted by microorganisms into methylmercury. 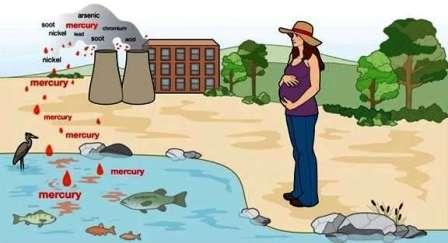 Mercury is highly toxic and easily absorbed into the fatty tissues and flesh of fishes and other animals.

Larger fish and birds feed on contaminated fish and continue to pass the poison up the food chain to the largest predators such as sharks, swordfish, mackerel, and tuna.

If you eat mercury contaminated food it is most readily absorbed by your fatty organs.

It accumulates in your bloodstream, breast milk, areas of the brain, the umbilical chord and unborn fetus in pregnant women.

The neurotoxin causes brain degeneration and growth impairment of developing fetuses. It is also contributed to learning and thinking difficulties in newborn babies.

MERCURY POISONING IN FISH and SHELLFISH

Fish and shellfish are rich in high-quality protein and nutrients and should be included in a healthy diet, especially for growing children. Nonetheless, traces of mercury are found in almost all fish.

This does not normally pose a high risk factor for healthy adults but mercury poisoning affects the nervous system in unborn babies and young children. The impairments correlate to the amount of fish eaten and the levels of fish exposure to mercury.

The current recommendations from the US Food and Drug Administration (FDA) and the Environmental Protection Agency (EPA) to expectant mothers and young children are to eat a variety of different fishes with low mercury levels.