Parrot fishes species (around 90) are now adjudged to be more closely related to wrasses than once thought.

Parrotfishes congregate in most shallow coral and sea-grass regions of tropical oceans and the Indo-Pacific in particular richness.

They are considered to be herbivores but their parrot-like characteristic for their dentition suggests that they are not true vegetarians.

Their pharyngeal teeth grind and rasp coralline algae and a variety of reef organisms from rocky substrates and corals and they are strongly associated with bioerosion.

The importance of their erosive action and distribution of coral sands in marine biomes prevents excessive algae growth. 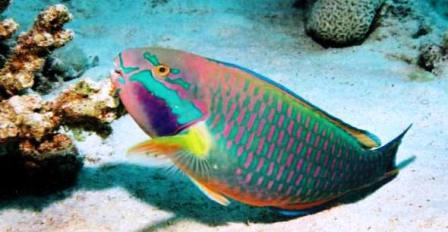 The biggest percentage of parrot fish often reaches a healthy 50 centimeters in length and in fact the gigantic green humphead parrotfish measure in excess of 1.3 meters.

Parrot fishes have a peculiar habit of secreting a mucus cocoon. The queen parrotfish excrete the protective mucus membrane from its mouth that shrouds the fish before it sleeps.

Experts assume that the reason is to evade scent-sniffing predators such as moray eels.

The fact that their skin also contains an antioxidant substance which helps the fish to repair damaged body parts and repel parasites is instrumental in the furtherance of the specie.

Most parrot fish species are hermaphrodites. The exception is the marbled parrotfish which does not change sex. During reproduction they release minuscule eggs into the water. The eggs float freely in the currents of plankton until they finally come to rest and hatch in the corals.