Mola Molas are also known as ocean sunfish and sometimes called moonfish in some areas of the world.

The mola mola is so highly advanced in its cranial development and evolutionary diversification that their brain is visually similar to that of humans.

Sunfish have fewer vertebrae than most bony fishes which makes their body noticeably shorter in length when compared to its height.

It is related to the same family as puffer and porcupine fish, but their compact body is distinctly larger, flatter and heavier. 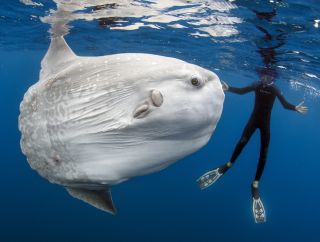 It is reported to be the heaviest of all bony fishes at 2,000 kg in some instances.

Mola mola fish tend to be loners. Adults discontinue schooling as they mature.

The female sunfish is extremely fecund for a vertebrate, often laying more than 300 million eggs.

Nevertheless we are not truly sure whether their species could be endangered because of the lack of reliable status information and population facts.

unfish are tagged in some areas of the world as they swim and feed. Mola mola like to hover nonthreatening near to the surface of the oceans.

This creates vulnerability for their species because they often get caught in fishing nets. Basic data from recent tagging tests suggest that this is a bigger problem than once thought and their species may be in serious decline.

Little is known about the natural habitat of the mola mola fish species. Their population is being studied by enthusiasts and scientists to determine the extent of their global ocean habitats.

They are found in most temperate and tropical zones with sightings also documented in the southern hemisphere in South Africa and as far north as in the Arctic Circle. They are known to dive depths close to a thousand meters down and make the dives dozens of times a day.

The mola mola fish is not normally aggressive but they bite when they are intimidated or harassed. They eat jellyfish and in fact they eat more jellies than any other creature in the world.