Wreck Diving is just one of the many types of fun recreational scuba diving activities and is usually aimed at exploring sunken shipwrecks or crashed air crafts.

Wreck dive sites can also be created by intentionally sinking a vessel or retired ship which may create an artificial coral reef site.

The fascination of wreck diving includes;

Southeast Asia has a huge choice of great dive sites and Thailand boasts some of the best Wreck Diving in the Asian Continent.

Scuba Diving Wrecks are available for divers in Phuket, Pattaya, Samui and many of the Thai Islands both in the Andaman Sea and also The Gulf of Thailand. 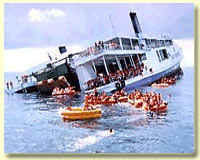 The King Cruiser Wreck is one of the best known Shipwrecks in Phuket and on the fourth of May in 1997 this 85 meter catamaran passenger ferry wandered off course and hit the Anemone Reef near to the Phi Phi Islands.

This ripped one of the twin hulls wide open but with no loss of life, the King Cruiser sunk within an hour of the accident and has become a huge artificial reef in the clear blue waters close to Phuket.

With many decks, large open passages and depths that range between twelve and thirty meters, it's an ideal shipwreck dive in Thailand for all adventurous scuba divers.

Big Blue Wreck near Koh Samui - In April of 2009 a wooden overnight ferry that would transport passengers and goods from Koh Tao Island to Chumphon City sank in rough waves and strong wind. The boat sank slowly allowing all the occupants to be rescued.

Without knowing the actual name of this boat we have named this large blue nightboat simply the “Big Blue Wreck”. More information needs to be gathered and a survey to be conducted before the wreck will be opened up to Big Blue Tech customers.

Pattaya Vertical Wreck - Easily Pattaya’s most famous dive site, the Vertical wreck has attracted thousands of avid Scuba divers from around the world to experience the wonder of swimming around this unique underwater structure.

Prior to its’ sinking on 25th August 1996 the ship, originally build in Japan and called the ‘Koho Maru 5’ lead a most unremarkable life carrying LPG from one destination to another.

Advanced Scuba Wreck Diving can be sectioned into three main categories and each ascending level may involve more risk and therefore greater levels of training, experience and equipment;

The least hazardous forms of wreck diving are commonly known as non-penetration dives and as wrecks can be popular fishing sites, divers should still be aware of the risks of entanglement from fishing nets and fishing lines.

Generally a swim over the wreck would not create too much trouble for divers and its often chosen as one of the elected PADI Advanced Open Water Dives.

Penetration of a wreck within the light zone presents the possibility of increased hazards due to an overhead environment and the closeness of the wreck's structure. However, usually these hazards are more manageable because of the visible exit point and a certain amount of external light.

Because the risk of entanglement and siltout inside the wreck as well as the extra consideration of having to surface in the event of an emergency, this partial penetration diving is often explored during the PADI Wreck Diver Specialty Course.

Full wreck penetration diving involves understandably the greatest level of risks to scuba divers which can also include the risk of becoming lost within the structure.

Additional risks of complete darkness and the inability to make an unassisted escape in the unlikely event of an air supply problem make full penetration an optional dive of the PADI Wreck Penetration Diver.