Grouper fish have many alternative names in different parts of the world.

The origin of its name is thought to be from the South American Portuguese word 'Garoupa' but other names include groper in Australia and 'Hammour' in the Middle East.

Groupers belong to the diverse ray-finned group of fish known as teleostei.

They are typically a stout fish with a large mouth and an equally large body.

Giant groupers (Epinephelus lanceolatus) often weigh up to 100 kg and measure more than a meter in length.

These factors contribute to the grouper fish's general laziness and slow-swimming characteristics. 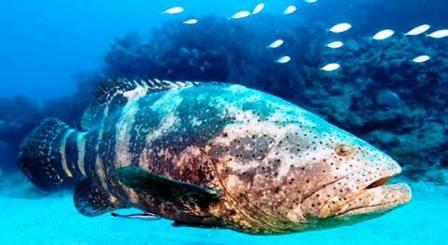 They often appear threatening and fearsome because of their size. The truth is that groupers are relatively timid fish.

They have enormous mouths but have few teeth. Their teeth and jaws are used to crush their prey rather than bite it.

In fact they usually swallow their food whole instead of ripping pieces from it.

A grouper's favorite meal is other fishes and octopuses. They are also known to eat some crustaceans.

They use their wide mouths and powerful gill muscles to create a suction system that draws their food into their throat.

The technique is so powerful and strong that they often suck in their victim from a distance. They shift and remove sand from their shelter using the same system.