Fish families do not get more wide-ranging than the family of gobies.

They are not typically a big fish and the largest majorities are small in length.

In fact their species includes the tiniest vertebrates less than 1 cm long and most matured goby fish measure less than 10 centimeters.

There is usually an exception to most facts and the 30 cm dragon goby is one of the biggest.

Gobies are difficult to identify as there are more than 1,400 different species in their family. Many of them exhibit co-existent symbiotic relationships with burrowing shrimps.

They are referred to as watchmen or prawn gobies. The goby fish guards the entrance of their small burrow and provides food for the shrimp. The blind shrimp shifts sand and loose sediment from the hole and provides a safe home for goby spawning. 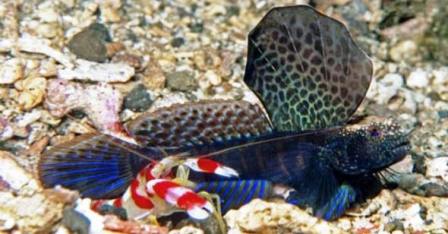 Goby fish have unusual pectoral fins. Their pectorals are fused together which forms a disc-shaped sucker foot.

This helps them to cling to rocks or stick to corals. Gobies kept in glass aquariums have been seen stuck to the tank walls by their same morphed appendage.

Their favourite food is small invertebrates. Some of the larger goby species are known to feed on other small fishes and plank tonic algae is eaten by a few smaller species.

Male and females typically share the burrow which provides them with a sheltered place to spawn. Both gender dig with their mouths and keep the burrow clear of debris by fanning away sedimentary sand.

The size of the burrows is relative to the size of the goby but often their burrowing reaches huge proportions up to 60 cm in diameter. Gobies place small rubble fragments of coral to block the entrance of their hole especially during spawning times.

Goby females often lay up to 5,000 eggs during the reproductive period. The eggs stick to vegetation such as coral and substrate. The male supervises the eggs for a few days until they hatch and new colorless larvae are born.

Most young only take a few months to reach adult maturity and warm water dwellers often live up to ten years.