Its common name of 'feather duster' refers to its giant size fan-like colored crown tentacles situated on each side of its head.

The feathery branchiae unfurl while the worm feeds and breathes but swiftly retreats its radiole inside the tube as a defensive reaction.

They belong with the family Sabellidae which are distinguished by the materials used to construct their tubes. Sabellids use mucus and coral rubble to cement sandy tube, whereas serpulids use calcareous substances.

Feather duster worms inhabit inter-tidal zones of most tropical seas and the Indo-Pacific regions. Their tube size ranges up to a few inches long but the diameter of their multicolored fan-shaped crown often grows to seven inches in diameter.

Like most tube worms, they feed on captured particulate matter suspended in the water column. Their few predators devour their sedimentary funnel which is chewed on by sea urchins and most crustaceans. 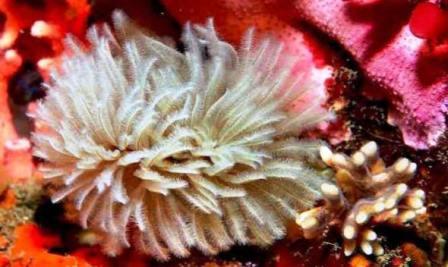 They often grow together in masses of 100 strong, displaying an attractive cluster of red feather tentacles (radioles).

Their segmented bodies reach up to four inches long and they feed actively in the daytime by filtering passing water for plankton.

They are mostly found anchored to seabed rocks in the Caribbean, Mediterranean, and Indo-Pacific regions.

The predators of most other tube worms equally eat coco worms. They include hermit crabs, copperband butterfly fishes, and some snails.