What is Coral made of - Animal, Plant or Rock?

A single individual coral is known as a coral polyp.

There are many different type and species of coral having assorted sizes colors and living habits.

Depending on the species, a single coral polyp can be as small as a few millimeters or as large as 30 cms or more even.

All corals are – or were – living organisms. They are not simply mineral rock!

A coral reef is a collection of both live and dead corals.

Corals are animal organisms, but each type having a symbiotic life-supporting relationship with a primitive plant organism.

This is to say, that a coral is host to a plant form within – an algae - from which it to collect the nutritious by-products of the algae’s photosynthesis.

Most plants use the action of photosynthesis – collecting energy from sunlight and using that energy to convert nutritious substances into usable food.

Most corals as far as divers are concerned, live in shallow waters – where they have access to sunlight to enable the important process of photosynthesis. 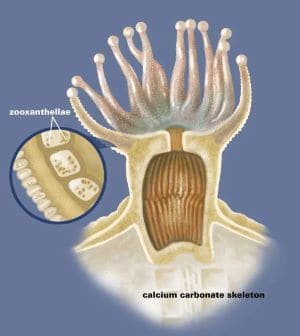 The algae (Zooxanthellae) that lives inside the basically-animal polyp, has a ‘house, shelter and basic raw materials which it synthesizes into various substances; for its own and the polyp’s needs.

Hence they form a symbiotic relationship – two different organisms relying upon each other for survival.

Corals are sometimes confused – or wrongly described as being rock.

This fallacy has been bought about because the coral has a hard skeleton of calcium carbonate – chalk – which incidentally is unlike most other skeletons in the animal kingdom in that it spends its life ‘outside’ the coral.

It does not support the ‘framework’ of the coral polyp. Instead it acts as a home and anchorage point of the coral to the ocean floor or rock.

Coral Polyps are gregarious in habit, and soon form colonies, which materialize into a cluster of polyps, which in turn brightens up our marine experience with countless types of live corals, or ultimately spectacular coral reefs.

What Is The Difference Between Hard Corals and Soft Corals?