Nudibranch - scientific name Nudibranchia - is one of over 3,000 known nematocysts species of soft-bodied sea slugs.

In fact they are soft, jazzy, shell-less gastropods.

The squishy bottom-dwelling marine mollusks inhabit most of the world's shallow sea beds in warm water and cold water oceans.

Fascinating divers and scientists alike, Nudibranchia are noted for their extraordinary rich colouring and striking characteristics.

Apart from the thousands of species already identified, biologists are discovering new types and classifications almost daily, with sizes ranging from a few millimeters up to 30 cm long and weighing up to a kilogram.

Even though the fascinating jelly-bodied sea slugs live in all tropical waters and they even exist in the coldest oceans, one fact is for sure; almost all nudibranch species display a remarkable array of sumptuous hues of mostly blues, reds, yellows, and pinks, anomalous shapes, and wickedly funny appendages.

The beautiful striking colors with flamboyant striped patterns and polka-dot spots all over these ocean organisms make them very popular for underwater photography.

You can see why this is indisputably the case in our nudibranch pictures and image gallery of aquatic animals. 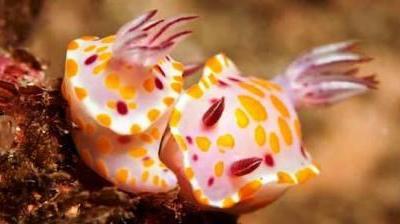 Nudibranchia belong to the 40,000 plus species of the class gastropoda. This family also includes snails, sea hares, limpets, and sea slugs.

Although many gastropods have shells, adult nudibranches shed their exoskeleton at the end of the larval stage.

During this time young nudibranchs also undergo a procedure known as 'torsion'.

Torsion means they completely twist their oblong shaped body 180 degrees on the foot and move the gills and anus to a position on top of their head.

This form of placement means the adults have now become asymmetrical.

Mature sea slug species have a seemingly innocent existence and perhaps partly because they generally do not live long lives. In fact, most studies and information suggests that the majority of the species survive in the wild for only a few weeks and perhaps up to one year for others.

The name nudibranch is a Latin word meaning 'nudus' (naked) and 'branch' (gills) which generally describes and refers to naked feathery gills and horns protruding from their back.

There are two main species types - dorid and eolid nudibranchs. Identification is achieved by the way that they breathe. Dorid species have gills at the back end for breathing (posteria) whereas the eolid species have finger-like branched or thread-like tentacles (cerata) covering their back.

Cerata are generally used for breathing, helping with digestion, and for defensive protection. The oral tentacles are located at the front, often with one horn-like filament rhinophore on top, with cerata appendages flowing along the back.

Some species of Nudibranchia have tentacles from their head flowing upwards in the water column which help them to smell and taste. They also have a pair of tentacles with scent receptors called rhinophores.

These highly sensitive organs function similar to our noses by enabling them to smell or sense food and provide them with sufficient information to identify their surroundings as well as other sea slugs.

Because the sea slug's rhinophores are targeted by hungry fish, nudibranch can retract the tentacles back at will into a hidden skin pocket if they feel threatened or sense danger.

Sea slugs are found almost anywhere there is water. You can find these feisty little creatures in your local tide pool, on tropical coral reefs, and even in the coldest depths of the ocean floor.

If you have ever watched to determine how a sea slug moves, you will realize that they have a flat, broad, foot-like muscle.

The muscular foot helps them to move, leaving behind a slimy trail as they travel.

In fact, chemicals in the the trail of slime alerts other sea slugs of danger and the scent also helps them to find a mate.

For this reason most nudibranchs are found on the ocean bed.

Interestingly though, there are some species that can flex these muscles and swim for a short distance.

Nudibranchia have limited and lackluster vision distinguishing only light and dark. Their eyesight is not strong enough to see their own brilliant coloration. Rhinophores, which are situated on top of their head, receive enough information about the world that they live in so they can identify their prey.

Although they are not usually poisonous to humans, the exception being Glaucus atlanticus, some species of sea slug are toxic to prey using their cerata to defend themselves.

Eolid nudibranchs use their cerata to store foul-tasting poisonous stinging cells called nematocysts from their food - such as the Portugese man-of-war jellyfish - and the toxins can be used to sting their predators.

Dorid varieties have an ability to produce their own toxins and they are able to absorb them from their food. Some species are able to photosynthesize coral and algae combined with solar energy they can harness the power of sunlight to produce a rich source of nutrients.

This food source from sunlight and algae chloroplasts are absorbed into the cerata creating a nutritious food supply helping to sustain them for several months.

Nudibranchs are carnivorous and they get their impressively bright colors from the food that they eat. They eat using a radula with tiny teeth.

They use it to scrape substrate and graze mostly on algae. Nonetheless, they also include hydroids, anemones, barnacles, other sea slugs, coral, sponges, and fish eggs in their diet. Interestingly, some species are picky eaters often only feeding on specific food types or a single source of prey.

The fact that Nudibranches are simultaneous hermaphrodites means that they possess the reproductive sex organs of both male and female. Being hermaphroditic, they can mate with any mature individual of the species.

This is important to maximize their mating activity especially because they do not move far on the seabed, finding a mate is difficult, and are solitary marine creatures generally.

When mating, they can normally mate with any adult passing nearby. By laying a mass of spiral-shaped or coiled eggs, the young hatch as larvae swimming freely in the ocean.

They will eventually come to rest on the ocean floor and live their adult life. Sea slugs have become extremely important to the development of some medicines and scientists are actively studying the species' nervous system for further research.