Astonishingly, each of the seven turtle species is classified as endangered, threatened or vulnerable.

Sea turtle populations are currently in jeopardy primarily because of the fishing industry, ocean pollution, and over consumption of their meat and eggs.

The picture is a loggerhead turtle hatchling dashing to the relative sanctuary of the water.

Sea turtle conservationists estimate species survival rates to adulthood are around one in 1000. Human activities are directly responsible for their decline and we need to change our intemperate attitude for the sake of these defenseless and endangered creatures. 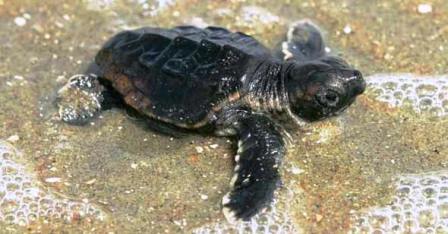 These marine reptiles need to surface to breathe air.

Thousands of turtles die needlessly from drowning every year because they get snagged in fishing nets and long-lines during their ascent to sea level.

You might suggest that the unfortunate death of tens of thousands of turtles is an accidental tragedy of fishing industry materials.

Nonetheless, when trawlers use modern fishing techniques such as larger hooks and traps, less turtles die from being trapped and significantly more survive.

Why do turtles eat plastic garbage bags and trash if it kills them? The simple yet devastating fact is turtles eat jellyfish. They often mistake small white or transparent floating plastic bags as jellyfish.

Turtles rarely fully digest plastic after consuming it and they die a slow death from a blocked breathing or digestive passage. Garbage consumption from ocean debris and abandoned commercial fishing and gill nets cause more entanglement issues and consequently countless more drowned turtles.

Regrettably, for many years turtle eggs and meat have been considered tasty to eat in far too many countries. As a result of the endangerment to their species, the Appendix I of the Convention on International Trade in Endangered Species of Wild Fauna and Flora (CITES) currently states that turtle consumption is illegal in some areas, but not all.

Nevertheless, the illegal trade in turtle body parts, particularly their shells, and the overconsumption continues. Sadly, their shells are also used in jewelry and attractive handicrafts. As if that was not bad enough, their oil is also used in cosmetics and in medicine production.

The female lays her eggs in the sand and the anxious tiny hatchlings scamper towards the brightest lights. Instead of heading to the safety of the water horizon, the newly hatched turtles often get disoriented and head for artificial lights on shore.

Divers and Non-divers Help Save Turtles

1. Take Photos and Memories Not Souvenirs

Despite seeing countless examples of bad diver behavior of touching, chasing, and riding on their huge shells, turtles are in fact sensitive marine creatures.

Despite their sensitivity, they also have large powerful jaws which can bite. They are easily stressed but are often unperturbed for long periods by observing divers' who do not touch or harass them.

2. Get Involved In Underwater and Beach Clean-ups

Helping to organise an environmental conservation activity is a rewarding experience and participating in a beach or underwater clean-up is uplifting and satisfying. Not only are you helping to protect your local dive site, but also making it a safer habitat in which marine animals can live.

Underwater trash and garbage pollution is downright ugly at best and selfishly intemperate at the worst. Marine creatures dying a slow and agonizing death underwater from consuming human waste products are a disgusting hallmark of our current generation.

Divers also have unique opportunities opportunity to set trapped or cut entangled turtles free. Saving a turtle's precious life is comparable to saving the family pet and totally justified while you can do so safely.

Scuba divers are often called 'ambassadors of the sea'. They often get to see the real damage caused by discarded plastic garbage in our oceans. Tragically, marine debris is mistaken as food by most aquatic animals and birds.

Non-divers can contribute enormously to the growing awareness of saving sea turtles by reducing their dependency on plastic items, especially shopping carrier bags.

Cut the drink six-pack circles before you discard them into the trash can to reduce the number of animals that die from getting trapped in these deadly drink rings. Keep trash out of the world's oceans for the sake of future generations.

Turtle conservation and research groups invite participation and sponsorship support to help fund their cause. Helping a research group gives you an opportunity to witness female turtle nesting, egg depositing, and juvenile hatchery. You get to see how researchers measure, collect data, and tag these amazing reptiles.

Nesting female turtles should be observed quietly from a distance. The main reason is to avoid frightening her with flashing lights and to give the hatched baby turtles natural light to guide them towards the water.

Divers and non-divers can help to save turtles from extinction by not consuming turtle meat. Do not buy trinkets and jewelry made from their shells to avoid supporting the black market trade in turtle body parts.