The Bull Shark - scientific name Carcharhinus leucas - commonly exists in shallow warm-water oceans. It is essentially a dangerous and aggressive marine animal which belong with a migratory and live-bearing species of medium-size requiem sharks.

In fact, despite the feared fish being found commonly alongside tropical shores and coastlines, they are also sighted upstream in freshwater lakes and brackish waters. Interestingly, its true classification of Zambezi Shark derives from its inland sightings several thousands of miles away from salty seas.

One reason the bull shark is characterized among the most dangerous in the world is because of its territorial hunting habits. Stalking their prey in shallow tropical waters, they feed mostly on big fish and large mammals. In actuality even though bull sharks will devour practically anything that moves - or not - they do not normally eat humans as part of their diet. 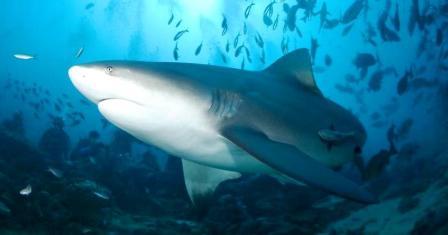 Factual studies and well-documented feeding habits and their characteristics of attack indisputably show them cruising in freshwater rivers such as the Amazon and in high population environments - such as tropical coastlines - where people may be swimming, snorkeling, or surfing.

Bull sharks - along with their close relatives Great Whites and Tiger Sharks - are rated as the most likely to attack and bite humans. They are fast swimmers and extremely agile predators. Whether the attacks are cases of inadvertent 'mistaken identity' or out of curiosity they often end with catastrophic results.

Typically hunting alone, both at night and during the day time, they often hunt in turbid water estuaries. Their carnivorous diet consists of almost anything but mostly they eat bony fishes. Dolphins and sea turtles are not safe from their huge crushing jaws and rows of razor-like teeth either. In truth, they will happily sink a deadly tooth into any misfortunate diving bird, crocodile, training racehorse in the surf, and they even eat other shark species. Perhaps for this reason, the vociferous predator's teeth are often sold as curios.

The liking for shallow waters has probably been responsible for its incursions into fresh water areas - together with the fact that it is a voracious feeder - tempting it to wander into inland waterways. They are biologically well adapted to the fresh water and river environments. Though not fully documented, the bull shark's tolerance to fresh water seaways allow for stays in excess of 12 - 14 days. Therefore, this commonplace aggressor does not simply pop in and out of different habitats.

Most sharks only survive in salt water but the bull shark can retain its salt levels even in fresh water systems. Scientists have determined that this unique ability is due to special adaptations developed inside the marine animal's kidneys and several glands near its tail.

Characteristics of the Zambezi

The picture of a bull shark shows what they look like but there are several striking features which differentiate the pugnacious Zambezi from other species. The female is heavier than the male with an average weight of 140 kg. The average weight for the male is around 95 kilograms.

Typically their stout body length averages 2.5 meters but they are often found growing to an overall length over three meters long. Its appearance is similar in some ways to the Great White but the main identification characteristics of the Zambezi is the gray skin coloring on top with a white underside and long pectoral fins with darkened tips.

Identification is made easier by its overpowering and stocky appearance with a short, rounded, and blunt snout. Even though almost all the fish species of Carcharhiniformes are gray colored, a particular facet and conspicuous feature of the bull shark is their small penetrating eyes. When you notice the triangular shaped dorsal fin, subdued coloring, and see the white underbelly, it unmistakably represents the awe-inspiring Zambezi.

The nickname 'Bull Shark' is possibly derived from their habit of head-butting prey before closing in for the kill. Others say that it is due to their stocky build. The fact remains that this bullish sea creature features immense power and strength - not be meddled with.