The common octopus vulgaris is a marine mollusk belonging to the biological order Octopod.

There are around 300 different animal species of octopi with divergent lifespans.

The average life expectancy for most types of octopus is 3 years with some warm water bottom-dwellers as short as six months existence.

These mollusks are cephalopod which means they display bilateral symmetry (plane symmetry) and are gifted with two eyes and eight legs (four pairs of arms).

They rank as the most intelligent invertebrate in their salt-water ocean kingdom.

The plural of their name also includes Octopodes and a 'consortium of octopuses' is the correct label for a large group. 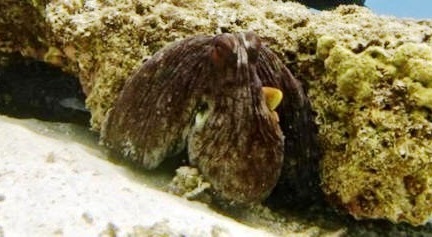 Contrary to common belief they do not have typical tentacles like most other mollusks such as cuttlefish or snails.

But an octopus's mobile muscular appendages are so similar in function and structural characteristics that they are often termed as tentacles.

They use their arms to seize their prey. Octopuses are nocturnal carnivores and they like to eat crabs, shrimps, snails and lobsters.

Unlike most cephalopod mollusc, octopuses do not have an internal skeleton but their bodies are almost entirely soft. The only rigid part on its anatomy is their parrot-like beak.

Consequently, they can squeeze into tiny holes and crevices to escape their main predators which sharks, dolphins and moray eels. They are generally free-swimming creatures in deep-water environments and around shallow coral reefs.

Octopus arms can grow back after separation from its body. If they lose a limb they make their escape arm-less leaving the damaged muscle wriggling and crawling for hours.

Octopuses are incredible creatures of underwater movement and disguise. They are marine invertebrates with unrivaled intelligence for their trickery and mesmerizing acts of mimicry.

They perform amazing feats of escapism and illusion that simply defies belief. They can hide inside, and escape through, tight spaces and holes that are 10% of their body size. They are masters at impersonation, imitation, camouflage, and deception.

They can change their body coloring and structural appearance in seconds. They mimic their natural surroundings transforming themselves to invisibility, and elude capture as they jettison a cloudburst of smoky blackish ink.

Their extra-large brain makes them likely contenders for the most intelligent invertebrate. It is almost certain that they have both short-term and long-tern memory capabilities. Evidence suggests that their memory storage is so advanced that they use it to solve physical and pictorial problems underwater.

Curiously, their amazing animal brainpower and behavioral intellect is not passed down to their young. There is very little direct contact between adult and young octopuses.

Octopuses are soft-bodied mollusks which mean they can squeeze their boneless body into a variety of habitats. They prefer shallow rock pile burrows or coral garden habitats where the female can lay eggs for protection. Somewhat surprisingly octopus reproduction is closely related to their premature demise.

The males die shortly after mating and the females do not eat food for about one month after laying their eggs. The female is genetically programmed to die once the baby octopus eggs have hatched. Endocrine is responsible for the genetic programming of their death.

Pet octopuses often live longer in captivity after surgical removal of the optic glands which produce their death-triggering chemical.

The blue-ringed species is the most poisonous of all octopuses. Though it is smaller than others, the deadly saliva from this deadly creature can kill humans. Their venom is so potent that it is capable of killing more than 20 adult humans at once.

There is currently no antivenom available. They have the audacity to rip off poisonous jellyfish tentacles and use them like a swashbuckler to fend off attackers.

A male blanket octopus spends his life drifting along, waiting for a girl. When he finds her, he fills a tentacle with sperm, rips it off, and gives it to her. Then he dies.