Copepods are minuscule crustaceans but although most of the 7,000 copepoda species measure less than two millimeters in size, as common organisms, their pivotal role in the earth's marine ecosystem is gigantic.

Some copepods drift in the seas as plankton but most of the species live a benthic zone existence on the ocean floor.

Copepods are members of the phylum Arthropods and make up the ocean's single-most source of nutritional protein.

Despite being related to the spider crab and some shrimps, copepod crustaceans only have the one single red eye with a large antenna centrally located on its head.

The typical crustacean hard exoskeleton shell is missing from their teardrop shaped transparent body. Around half of their species are external parasites ranging from one millimeter - smaller than krill - to almost one centimeter in size. 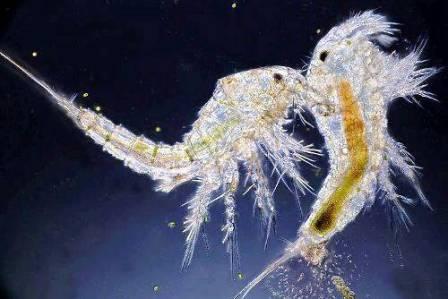 Copepod's gigantic contribution to the flow of vital nutrients in marine and freshwater ecosystems and is often unnoticed.

Copepods fall into four different groups which are determined and identified by their role in marine ecosystems and their behavioral characteristics. Free floating copepod groups include;

Calanoids Calanoida is the largest of all copepod species and their role in the ecosystem provides plentiful food sources for most marine animals.

Calanoids have developed water-resistant bristle structures all over their body segments which provide them with additional buoyancy for their free swimming movements.

They are also clearly characterized from other copepods by a large protruding antenna (rostrum) sprouting from the center if its upper body.

Cyclopoids Cyclopoids thrive most in freshwater environments. They are plank-tonic surface swimmers and relatively rare compared to other marine or brackish copepod crustacean species.

Cyclopoids are easily identified from other species because they do not develop a rostrum. Rostrums are tiny pointed projections sprouting from the copepods head.

Harpacticoids Harpacticoids are free-living copepods which spend their short life cycle swimming along the ocean floor. A newly hatched harpacticoid has only a few days of existence before it dies.

Nonetheless, they provide an invaluable role as a food source for sea anemones, small reef fishes, and most coral species, although some harpacticoids parasitize coral. Harpacticoids are often the first bugs to adorn fish aquarium tanks as they colonize the glass walls.

Misophrioida Misophrioids make up only a few species if the subclass Copepoda. They have the one anterior and one posterior subdivisions of their body which distinguishes them from other copepods.

The Role of Copepods

The National Oceanic and Atmospheric Administration (NOAA) have produced and currently maintains an online global database of copepod populations and composition changes.

The NOAA recognizes the role of copepods as ecological bio-indicators to ocean pollution and cleanness. Their studies show that copepod's behavior and composition may serve as vital indicators of larval fish food shortages and changes to global weather patterns.

Copepods consume tiny water-borne organic particles which often contain harmful toxins. The species help to purify oceanic and freshwater systems because they take the toxins with them as they settle and die on the sea bed.