The Christmas Tree Worm is its common nickname but in fact this member of the tube-dwelling marine sea worm family is found mostly on coral reefs and is scientifically called Spirobranchus giganteus.

They thrive best above 30 meters in tropical oceans worldwide from Indo-Pacific regions to the Caribbean but they rarely grow much taller than one inch.

Christmas tree worm species anchor themselves on skeleton coral heads - called porites - and grow by building a tunnel in which to live.

They are non-swimming multicolored cone-shaped spiral structures which never completely leave their tube so they rely strongly on flowing water currents to provide nutrients.

The popular name of the species comes from its fir tree appearance and not its diet or habitat. It is also known merely as a sea worm 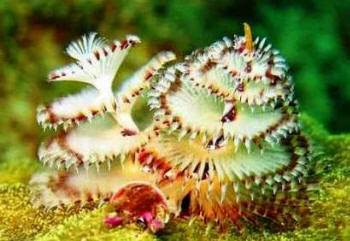 The tubular segments of the Christmas tree worm species are lined with tiny appendages (chaeta) that help with movement.

As it extends outwards through the tube the multicolored spirals create feeding structures and function as their respiratory system or gills.

They have tiny hair-like feathers which form circles protruding outwards from the central spine.

These features also contain plumes of feather-like ciliated radioles which entrap their prey and guide it towards their specialized mouth appendage digestive tract called a prostomial palp.

During reproduction both male and female shed their gametes directly into the sea. S. giganteus males cast sperm into the water coinciding with the release of eggs from the females.

Fertilized eggs drift along with zooplankton in the ocean currents developing into tiny larvae. When the larvae find a coral head in which to settle the microscopic Baby Christmas tree worms settle and begin to burrow creating their distinct tube-like dwelling.

They have a central brain which facilitates an efficient nervous system.

They excrete waste products like most polychaetes through a nephridium; an invertebrate's version of a kidney.

The animal bores a tunnel-like hole into a living stony coral head.

It then secretes a calcareous tube into the burrow which surrounds and protects its body.

Despite acquiring this safe secure home they have few natural predators in the wild.

They have no fishery or culinary importance but their multicolored crowns of orange, blue, yellow, and white make them a favorite aquarists and a popular photographic creature for scuba divers.

Christmas tree worms are sharply responsive to interference and disturbances. They are very private and responsive sea creatures. They retract swiftly back into their tubular burrows at the merest shadow or movement and close the trap-door (the operculum) at mouth of their tunnel.

Touching, light changes and any undue motion will ensure that it retracts from life momentarily – disappearing until the perceived danger, or disturbance is over. Divers will need patience to see them at their best.

Nonetheless, they often lose tiny appendages to fish nipping at them before they can retract.

Calmly wait a few moments and the organism will usually re-emerge unfurling cautiously and 'testing the water' before fully expanding its beautiful spiral feather plumes and colors.